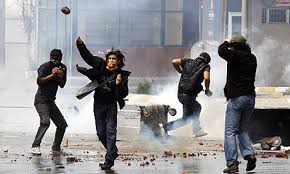 Switzerland, the land of peace and order? Yup. Rioting on same day every year.

The Swiss are known for precision-timing and this is true even for aberrant behavior.

Once a year, the Swiss get together in large cities – Zürich and Bern – where they burn cars, attack police, and generally wreak havoc, and that once-a-year is this weekend. It is how they celebrate May Day.

I remember Canadian May Days differently. They were made up of pole wrapping events where elementary school students dressed in spring pastel colours (boys, too, poor chumps) danced around a pole, each holding a broad colourful ribbon that they corporately braided around the pole.

Not me though. I was never chosen for the May Day dance. Even then, my teachers could see I shouldn’t be let alone with a long piece of rope in any form.

It was social death for a boy to be selected. I remember the year Martin Watts (his real name) got tapped for the St. Avila Elementary School May Day dance. Martin was only in the fourth grade, but he was old enough to know his life of manliness was flashing before him in a fiery ball of death. I wouldn’t say that Martin was a tough or a bully, but he was definitely someone to be avoided by those of us averse to bruising.

The things we do to kids.

To his credit, he did not cry. While the chosen girls exulted over their triumph, he had a tantrum the likes of which remains impressive even today, some 40-odd years later, much to the confusion of the proud teacher who delivered the happy news that he had made the cut. She likely possessed some neurological defect that prevented her from realizing the horror that would descend on any male forced to wear yellow and pink lederhosen while skipping around a pole singing fa la la.

In the end, poor Martin lost out, and he skipped along with the other students, red-faced, fuming and deliberately out-of-step. The lederhosen did nothing for his figure either.

I wouldn’t be surprised if the social outfall of this event led Martin to migrate to Europe where he inevitably launched an amazing career as the chief protagonist in May Day riots.

All this is to say, we’re not taking any big excursions this weekend, which may seem like chickening out, but Dave’s Swiss colleagues strongly advised against it. Of course, in my old reporter-life, the news of scheduled mayhem would have me walking right into the centre of it, the closer to the maniacs running the protest the better.

When I think about it now, I wonder how I escaped injury, except that anarchists were probably too surprised to see a middle-aged, middle-class woman with a badly knotted silk scarf show up in their midst, demanding answers. Probably thought I was a misguided teacher about to force them into a May Day dance.