I suspect all gargoyles were modeled after people stuck in immigration waiting rooms.

Yesterday, we went to the police office to process some exit paperwork. I opened the door to the sleek glass and grey office and was met with a powerful smell. It was the aroma of fear. For the first time since we came here, the waiting room was packed. Only minutes after I arrived, people were lining up outside the door.

I was the only natural blond in the room, a racist remark I suppose but in these days when in an immigration room full of Arab types, one does get a little nervous and when I noticed two angry-looking men at opposite ends of the room signalling to each other, I eyed their jackets closely for signs of bomb-vests. No paranoia here, just a well-informed person who watches world news and shudders. 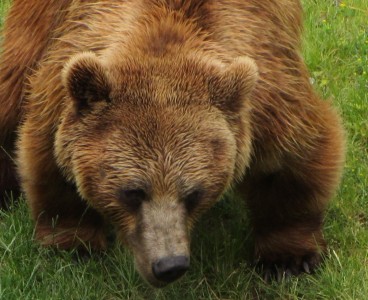 Bureaucracy is a bear.

As it turns out, they were signalling about me. I moved to a seat next to one and struck up a conversation. It is the reporter’s way of dealing with fear: Just start talking to the suspicious-looking person and see where that goes. Also, it put me closer to the exit.

The man said he only spoke German, but he was a quick study because when I prattled on, he suddenly spoke pretty good English. I have this gift that whoever I talk to magically acquires fluency in English, even as they deny it. I cannot explain this.

He lost most of his furious look when I asked him if I was in line behind him – I knew already that I was, but I suspected that with no formal line-up structure, the waiting room ‘clients’ were fearful of someone cutting in front of them. Nowhere is line-cutting more fraught with peril than in an immigration office full of people fleeing unstable countries. With the line-up firmly established and agreed upon, the two men relaxed a little, but not too much. They still had a meeting with stern bureaucrats in front of them.

Later, Dave and I went out and spent too much money on a steak dinner, just to calm our nerves. We’re not fleeing an oppressive government, but the atmosphere still rattles us.

The fun wasn’t over for me yet. Today I visited the bank on what was a mere administrative matter correcting a goof they made this month, but that turned into an impromptu interrogation.

Were I in Canada, I would have not answered any questions, demanded to know why they were so snoopy and reminded them that the error was theirs, not mine. But I am not in Canada. I have less status here than babies riding in strollers. So, I smiled, nodded, and got out of there as fast as I could, headed to the Lollipop store to load up on Jelly Bellys.

Switzerland is still a lovely country, but it doesn’t matter where you are when you’re a foreigner. You are still subject to the terrors of immigration and bank offices, which are the adult equivalent of a school principal’s office, circa 1960s, complete with leather straps.