They have homeless people, but not in near as many numbers as North American cities. As in all things to do with homeless populations, numbers are extremely difficult to count. One 1980 U.N. survey put the number of Swiss homeless at 2,400, but that figure is 30 years old. Switzerland’s overall population in 2009 was  7.7 million:

Biel homeless man has worn garbage-bag shoes for the past two weeks, even in the blistering heat.

They love Justin Bieber (who, by the way, has a strong Winnipeg connection):

Justin Bieber images are everywhere, such as on this junior sheet set at a local department store. His visage outnumbers that of Obama, Clinton (either one), Michael Jackson, the Beatles and anyone running in Canadas current federal election.

They are cane-enabled (get it: Cain’n Abel  – sorry, couldn’t stop myself). : 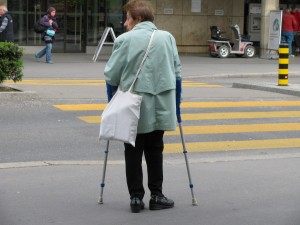 Elders favour canes over walkers. Even young people sport these arm-brace-style canes, making us wonder if polio races through the Swiss.

They view sidewalks and roadways as near-equals:

They park, and occasionally drive, on sidewalks.... not as often as the Spanish, but a lot more than North Americans.

They smoke, a lot:

One in four smoke, according to Switzerlands Federal Health Office. In both Canada and the U.S., one in five smoke. Despite the 25 per cent rate given by the Swiss government, the number of smokers looks higher on the street where the Swiss smoke as they walk, juggle babies, lounge in street cafes. Smoke is blowing into our suite as I write this as my Italian neighbour takes to the balcony for her morning fix.

Their public art holds some surprises:

Despite their reputation for attention to detail, their take on public art would make North American insurers and art/park commission managers gasp. These wrought-iron statues could inflict fatal wounds if someone tripped into one. Note: Dave does not let me twirl anywhere near these.

Just in case you dont quite see it: The arms on this prone statue are about two inches thick and maybe two feet long - would plunge through a chest wall or eye socket quite easily. Eeeew.