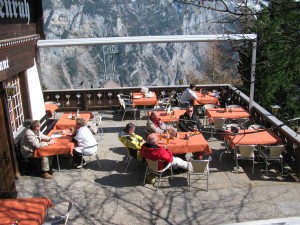 I may have said that out loud as we surveyed the menu  board at Hotel Alpenruh, the first restaurant/outdoor cafe to meet us as we staggered off the Lauterbrunnen gondola that swings up a 1,600-foot mountainside cliff in only five minutes.  This is the problem with living/travelling in Europe – I assume no one else understands English, but judging by our waitress’ demeanor, it seems I may have been wrong about that.

I was also wrong about the canned ravioli remark – unless Chef Boyardee has issued a cashew & wild garlic ravioli since we left North America.

We took an outdoor seat at Alpenruh’s open cafe, although a biting mountain wind was edging out the warm afternoon sun, a cold that was soon to be eclipsed by our waitress, who, as I mentioned earlier, may have heard my snarky remarks. We ordered the cashew/garlic ravioli (only $18!), but she put an end to that, saying that it would take a special request to the chef, which we found odd, considering that it was on their billboard. 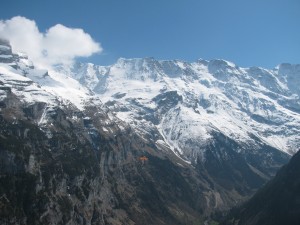 The view from the cafe.

The other view from the cafe. As you can see, the neighbourhood is a little rough.

She pointed us to the table menu that strictly observed certain serving hours for certain meals, so she said, but we couldn’t find anything to that effect in print. We were on a cliff, though, and in no position to make a fuss, so we ordered the $25.50 truffle ravioli. We were not overly upset about this, having long wanted to taste Europe’s legendary truffle, which is really just a clump of fungus, exactly what we’ve come to expect from the continent that turned snail-eating into an art.

Later, much much later, two plates of ravioli arrived, tossed in olive oil, sprinkled with wrinkly dried french beans and apple wedges that appear to have been lightly sautéed.

It was worth the wait, the snotty waitress and the high-altitude price. The pasta was cooked to that delicate point where it had just passed al dente, and the truffle filling’s flavour was restrained but savoury enough to lead to indelicate shoveling motions at the table.

The food and the view were the only highlights. The service was, as already mentioned, substandard, and hygiene did not appear high on the restaurant’s list.

The cafe tables were covered in orange “Griptex” kitchen shelf liner (found at all fine Wal-Mart stores for about $8 a roll), which was apparently left to compost as is, ie. it had not been cleaned or changed that week, judging by several unidentified black objects that we hoped were not the remnants of bird droppings or mouse scat (presumably, the mice get to dine on the tables after the human patrons have vacated the premises).

The cutlery, however, was weighty, sparkly and very posh, except that the waitress put it down on that orange table covering. Ugh.

The dessert menu was primarily made up of ice cream and sorbet, some served with rum and other liquors, however, we didn’t test any as we couldn’t be sure it would be served before the last train out (four hours later).

Note: Yes, I’m cheating. This entry should be on the recipe/restaurant review page. This is what happens when a journalist gets free of editors. She’s inclined to do as she pleases, even if it breaks the rules regarding placing certain topics in their corresponding sections.

Second note: Murren, a village almost wholly made up of dark-wooded chalets, hotels and a few ski shops, has plenty of eateries, so on our return trip, we won’t have to put up with Alpenruh, but we just might. It has almost the best views in town. The other restaurant we checked out listed horse cuts, a meat I am not going to risk eating again, not to mention its lunch menu prices ranged at around $35 per plate. Ouch.