Things are not going so well in the home-cooking department, a fact more notable after spending a weekend in Paris.

It’s not entirely my fault. I’m handicapped with a state-of-the-art $3,000 wall oven and a matching ceramic cook top that works on one setting: Inferno. 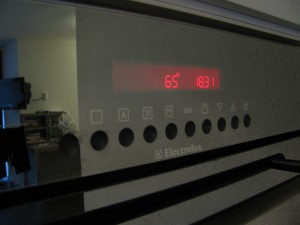 Anyone who understands this panel, please write to me.

The oven is a convection/microwave/conventional contraption with a panel of buttons that look like this (see right):

Can you point out the microwave button? No, it is not “M,” although that would seem about right. Almost four weeks in and we are still not sure what the M button does, except that pressing it causes a red light to glow and a rotating fan symbol to appear. It may a “blending” function.

The instructions aren’t very helpful either –  they’re in French, Italian and German, a hurdle that did not dissuade me much until I ran them through Google-Translate. It now appears the instructions were written by NASA scientists who spent a lot of time in the lab, and not much in writing class.

Tonight,  I decided to roast garlic. A few minutes in, something did not smell right and I opened the oven to find garlic shards blackened on the outside, rock-hard through the centre. I threw them into a frying pan, thinking that any heat is good heat so a little time with some butter would do the trick. It did not, possibly owing the inferno setting.

My humble attempt at supper.

Next, I unpeeled the wild coho salmon packaging to find that most of the contents were some kind of styro-cardboard backing over which a few bologna-style slices of fish lay in state. I tried to not think of the giant slabs of salmon I could have bought at home in Victoria for the price I paid for bologna-salmon.

Terrified into submission by the elitist oven, I didn’t dare attempt to bake or grill the fish. I put it in a pot to fry (yes, a pot for frying – I can’t fit the wider-bottomed frying pans on my small cooktop).  Now I have hardened salmon shards to match the garlic.

The one thing that our kitchen turns out with great success is carrots. We are having them every night. Already, we are seeing orange everywhere.

In the meantime, Dave just came home, looked in the pot of salmon and said, “We’re having carrots again?”