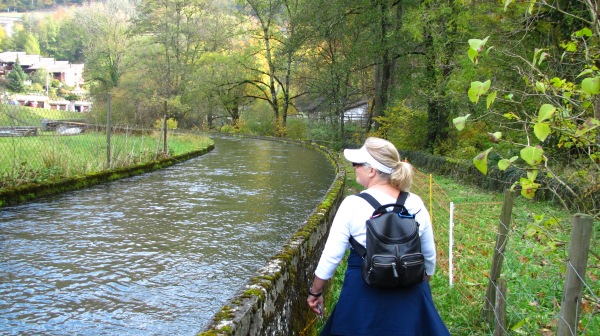 This photo has nothing to do with the subject of this blog post.

In a few hours, hundreds of thousands of North American children will wake to the thrill of anticipation: Halloween, and its accompanying sugar flood is almost upon them.

Here, in Switzerland, Halloween is not so apparent. In fact, it could be forgotten altogether but for one display at a local department store that has some ghoulish latex monster gloves with claws for fingernails and a few masks. It is possible that children here concern themselves with Halloween, but not that I’ve seen so far.

In Spain, the children in our neighbourhood knocked on our doors on Halloween, with nary a costume in sight, not even a bit of face paint. They demanded money, in their best English. I asked, in my not so great Spanish, why they expected money from me, to discover they operated under the delusion that a North American Halloween was free license to children to extract funds from their neighbours.

They were clear this was not the practice in Spain, however, we were North Americans, they were children and this was enough for them to try some door-to-door begging. Having just had my car recently painted by some anonymous artists, whom I suspected were these very same children, it was easy to turn them away with a warning that I did not want any more pintar on my Fiat and that I could go loco on their madre y padre if I caught the slightest whiff of spray paint.

But on to another topic …

I’m posting to this blog less frequently as I prepare to participate in an exercise of absolute insanity called Nanowrimo – an annual international write-50,000-words-over-the-30-days-of-November challenge. To kick-off this event, I met with some fellow writers at a Bern Starbucks yesterday, one of whom, as it turns out, is from Winnipeg.

Tatiana, as is her name, and I had fun talking about Confusion Corner, bargain-shopping, Mennonite names and Winnipeg boroughs to the point where the other writers’ brain waves flattened in boredom, but we did not care. We went on with our prairie references, and then quickly formed a voting bloc with the other North American writer in our midst, who happens to be from Minnesota, which makes her practically Canadian. We were still outnumbered by the Swiss, but this did not bother us as we were prepared to bring our spouses in to boost our voting numbers (I had brought mine, she had left hers elsewhere, but I’m sure in an emergency she could have summoned him).

As it happened, it’s not the kind of group that takes votes, but we were ready.

So through November I will aim to post twice a week to this blog, or maybe more often. We shall see. One thing is for sure, with the writing crunch upon me, I may write some crazy stuff here, just out of pure fatigue. It could be fun.

In the meantime, while I am not a big fan of Halloween, for those who want to mark the occasion, here is a video that you might find interesting. Click here. Make sure to read the intro first. (thank you to my friend JJ for alerting me to this video)