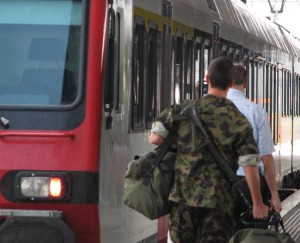 Soldier with gun slung across his back. At least he has no trouble carrying it when he's walking, but it's another story when he's looking for a place to put it down.

On the train ride from Zürich to our little town, two armed young soldiers boarded our car. The one in the seat next to us fumbled around with his rifle, first leaning it against the bench but then quickly grabbed the barrel as the rifle slid downward, then tried to hang it from a hook, before he finally propped it in the corner.

“I hope that thing is not loaded,” I whispered to my husband, but not too loudly in case the soldier was not a soldier, but some random lunatic roaming the rails.

This illustrates  the problem with not speaking the local languages or having studied up on Swiss military attire – we are out of the news loop, so if the authorities are looking for some crazy gunmen we would be the last to know, unless we were the first to get shot, in which case, we would be ahead of the news loop to a degree that would have thrilled my former editors, but not my mother. I’m retired, so I prayed that the soldiers were not maniacs, while knowing that if I were still a staff reporter, I would be praying in the opposite directions. Maniacs may be bad for everything else, but they are good for newsrooms that feed on the carrion of trauma.

Military service is mandatory in Switzerland and  scores of young Swiss-in-uniform ride the trains, usually carrying beer, not guns, although the guns could be hidden. We like to think they keep the guns and the beer separate, but we can’t prove it one way or the other.

Thus, we are introduced to one of the oddities of  Canadian culture where we listen to co-patriots groan at the U.S. for its love affair with guns, but seem less bothered by post-adolescents toting weapons on public transport in Europe, stowing rifles like awkward hockey sticks among the bench seats. But then the U.S. is closer, so it is easier to see what is going on down there. Not so easy with the Swiss who are further removed and who have seduced us all with chocolates, ice cream and endless stores of cheese, one variety for every village numbering 35 inhabitants or more.  This is how they get away with slinging guns around in public places – by soothing our nerves with chocolate. It works. I can’t see anything wrong with this. Pass the Lindt, Toberlone, Caisse chocolates please.

We are just back after three months in Canada where we married off a son and basked in the glow of Costco and Wal-Mart lights. On our return, today, we endured a completely uneventful trip where all our connecting flights went smoothly and no luggage was lost, mostly because we only took carry-on. Air Canada’s baggage handlers won’t find us so easy to fool after that trip in April where they lost track of our giant neon-glow-green  suitcase, possibly because its brightness blinded them temporarily.