In keeping with the week of wandering through the many blog themes offered by WordPress, here’s yet another one. Yesterday’s was Viva Chateau, which got a thumb’s down for grey typeset that was harder to see, and yet, it was so pretty. Today’s is Pilcrow. Anyone prefer one over the other?

Note: Yesterday’s photo of people on a bench by a lake was taken at Lac Biel. Today’s photo is of the River Aar at the locks near a canal that seems to be called Zihi, but we’re not sure about that name. 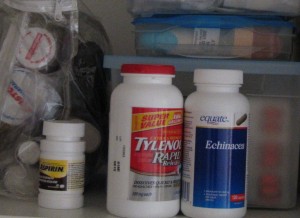 The joy of travelling to Switzerland twice in one year is that I get a do-over on packing. During my first three-month term here, there was time to consider what was missing from my life, what I wish I had shoehorned into my suitcase.

So last June, as I winged back home to Canada, I made a mental list of all the things I would haul to Switzerland on my return this fall, among which was going to be more Crystal Lite iced tea packets than Swiss customs agents had ever seen before.

What did I bring back? Not a single sleeve of Crystal Lite.

Instead, my suitcase rattled with bottles of Tylenol, Advil, Aspirin, Nyquil, all manner of stomach remedies, prescriptions, extra eyeglasses, medical records and the like.

Living overseas for an extended time is something like shooting up to the moon. You know you will have to do without, and there won’t be much there that’s recognizable. Medications overseas typically have different names, even those produced by the same manufacturer. I have no clue what painkillers are called here in Switzerland, although when living in Spain we found a painkiller that does not grace North American shelves. It worked wonders, leading me to suspect it was some kind of over-counter codeine/heroin derivative.

It’s not just the different names and languages that produce hurdles; sometimes dosing levels differ, which has been known to cause some serious health crises.

All of this leads Dave to think about his young-adult trips to Europe in which he purchased no emergency health insurance, brought no medications and somehow still made it home in the same condition in which he left. Of course, back then he didn’t have any assets that a foreign hospital or Health Canada could seize.

Those were the days.

And so in the spirit of providing real information in this blog, something I don’t do very often, I advise travellers pack some pharmaceuticals, unless you want to chance finding yourself at a drugstore late at night where the pharmacist speaks French, Latvian and Parsee but no English, and offers you diarrhea remedies when you need something for a fever, that is if he really is a pharmacist. You could be talking to a teenage part-time cashier for all you know. And this is if you’re lucky enough to find a drugstore open late. I have yet to see a 24-hour pharmacy in Europe. I’m not saying they don’t exist; just that they are not readily evident.

Know before you go: