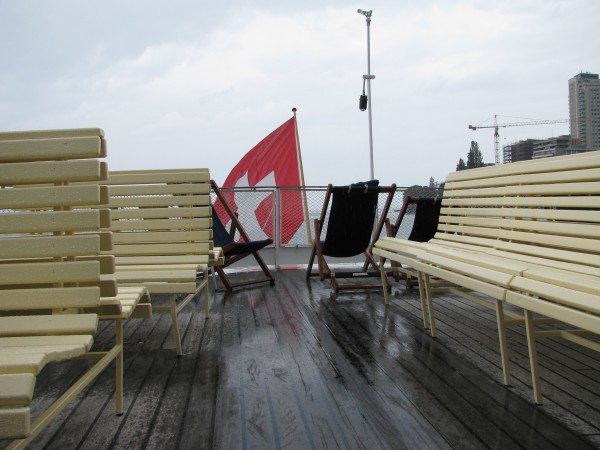 Chateau de Chillon (francy French name for Castle Chillon) is a 10-minute boat ride or 60-minute walk from Montreux, which might make it sound like a can-be-missed side-trip to this luscious region that was the trade nexus for France, Switzerland and Italy. That would be a mistake.

We decided to take the castle tour before walking around Montreux’s old town because  we could imagine coming to the end of the day and shrugging it off. We’re backwards that way. Do the least appealing thing first. This is because we were both born on the prairies and so are accustomed to the bad coming before the good, like winter before spring. That is who we are.

From the train station, we wove down Montreux’s streets until we found ourselves at the promenade skirting Lac Geneva (locally known as Lac Leman). I say “found” ourselves because we definitely got lost in this short hike, due to differing opinions on the directions we received at the train ticket desk (which we pretended was a tourist office  – that might have been the beginning of our problem).

Noisy, crowded, panicked crew - all part of the fun.

Dave said the agent said to go one direction, but I was certain she had pointed in the other. So we rambled around a little bit. It added to our aching legs and sore feet at the end of the day, but as I said, we are prairie people at heart. Too much inconvenience and physical discomfort is just about right.

We decided to take the boat to Chillon, and purchased two first class tickets – we felt rather rich about it, but they were only $2 more than regular fare, and even at that we only paid $8 a pop. The clerk laughed along with us as we joked over our minor extravagance. In hindsight, she was not so much laughing with us, as at us. It is really hard to tell the difference until later.

The boat arrived, a genuine paddlewheel named “Simplon,” horns blaring such that my eardrums are still fixed in a concave position. It swept  up to the wharf a in a hurried fashion, a little behind schedule, which may explain why the crew did not so much guide the deboarding passengers off as evacuate them, then pull us in as though the wharf were ablaze.

The crew shouted something about first class going upstairs, and it was our arrival there that made us understand the ticket gal’s happy demeanor. We had been suckered. First-class meant you could go upstairs and as upstairs only cost $2 more than downstairs, everybody jumped at it. It was packed and decidedly more uncomfortable than the life being enjoyed by the second-class cheapos lounging around on the lower decks. We rejoined the not-so-huddled masses, where we really belong.

But not before taking in the athleticism of the top-deck wait-staff. Most of the boat, up and down, is a restaurant, packed to the gunwales with crowded tables that the waiters raced to and from the kitchen that was set amidships. The waiters lined up like Olympic sprinters, rocking on their feet nervously, shaking out their legs. When their dishes were called, they plunged into the steaming kitchen and emerged at full speed, defying the laws of physics as they darted among the throng of strolling passengers, the waiters’ arms concealed beneath a half-dozen teetering plates. It was worth the two bucks just to see  this.

From across the lake, we could see a white mist approaching. It was not a mist, it was a monsoon that chased the outer decks indoors, giving the boat the air of an over-packed refugee ship. I half-expected to see the fog unfurl the shores of Vancouver Island before us, with a Canada Armed Forces escort leading the way.

And so we arrived at Chateau de Chillon, somewhat wet, amused and already ripped off. We sighed in satisfaction.

2 thoughts on “To the castle – getting there is half the fun.”