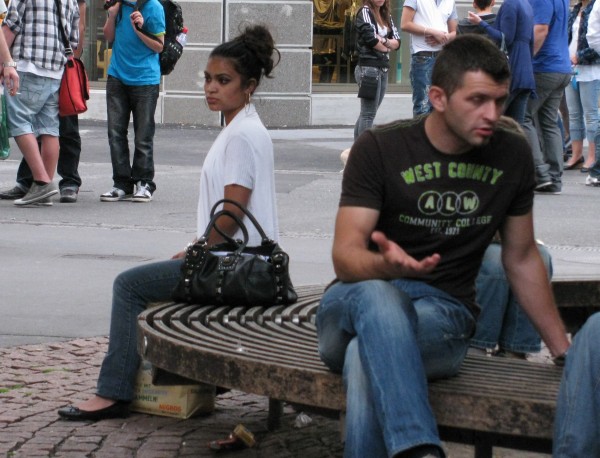 Will carefully attired T-shirt man ever turn around and notice designer-handbag girl seated behind him?

English 101 in a foreign land consists of watching your mouth, as I was reminded last night on our evening stroll.

At a store something like The Bay or Macy’s, a young otherwise-normal-looking man dressed up in a boyish sailor outfit topped off with a white sailor cap a la “Popeye” stood in the women’s cosmetics department, where he was engaged in the competing tasks of  trying to attract customers to his kiosk without drawing attention to himself or more specifically his ‘uniform.’

Manhunting is best done in packs. Note stilettos: They both attract a potential mate, and serve as a significant sharp-edged weapon should the woman wish to repel him. See the guys in the background who have snagged a few gals - is that Jersey Shore's "The Situation" in the ball cap?

Quite smug in the conviction he did not speak English, I commented as I sauntered past him,  “Do they pay you extra for wearing the hat?”

“As a matter of fact, they don’t, but they should,” he replied in very good English.

He seemed relieved to commiserate with someone about his grave misfortune. I say this on the grounds that he followed me a few steps whinging about his lousy job. I don’t think he was looking for the right moment to smack me in the back of the head.

At least, that is what I tell myself in order to assuage my guilt for openly mocking him when I thought I was safe in the confines of a linguistic silo.

Thursdays are special in Biel, and for all I know, in all of Switzerland. It is the night that stores stay open until 9 p.m.

Every other night, they are closed before seven. It is inconvenient for shoppers, but on the whole it is a good idea in that retail staff don’t have to give up their evenings for their low-wage jobs.

Also, it saves sailor-boy from having to spend a few extra evening hours in costume when his college buddies might show up with their girlfriends, ensuring that he would never have a girlfriend himself. 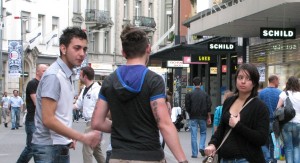 This young woman has snagged a few males, but she knows she can do better. She's still shopping the crowd.

The later store hours give the town’s young single population an excuse to take over the streets for another type of wares-browsing: Boyfriend/girlfriend shopping.

The girls/women dress up way above the grade required for a casual shopping excursion. They stride past the males clustered at the street corners, none of whom, by the way, I think are worth the effort.

“Go to school,” I want to tell them. “Don’t settle for the kind of guy who aspires to Jersey Shore fashion levels and street-corner posturing.

Here are the photos from last night. Am I wrong?

Note: Apologies for the photo quality. I took these on the sly, not wanting to have someone challenge me, grab my camera, demand answers, although that would have led to a much more interesting blog post.

Gender fashion inequities apparent on the street: She worked hard in front of the mirror for hours to achieve this look. The guy in the background carrying a gray sweater has only seen his reflection in passing glances in storefront windows since 2007. He does not own a mirror.

This is definitely a catch-and-release fishing pond.

This woman is back looking to refund the guy she picked up here years ago. 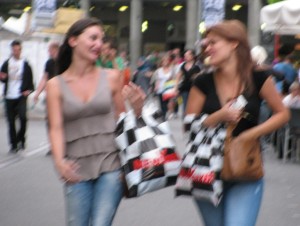 Women hunt in pairs so as to appear to not be looking at the loitering males. Do you think these two are looking at one another? They are not. Their eyes are gazing past each other, surveying the prospects. This prevents them from being branded with the dreaded "desperate for a date" syndrome" - a death knell for females no matter how good-looking they may be. 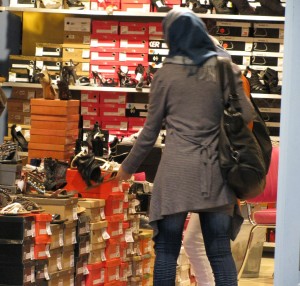 Trolling must sometimes be concealed by feigning interest in shoes.