A classic Montreux old-quarter building. How it disgusted us.

It may have been the hosing-down rain, the blasts of wind intensifying as it whistled in through the castle’s torture chamber keyhole openings or the fact we have been in Europe for six weeks now, but at about 5:23 p.m. May 14th, we reached saturation point.

Walking the deserted narrow cobblestone streets that braid their way down the steep-pitched Montreux mountainside, we looked on fairytale clusters of stone buildings, accented with aubergine and cherry shutters, inviting shop windows with unique teacup and hen pottery figures.

It was then that we reached the conclusion we were not suitably amused by the famous enclave that has been home to Shania Twain, her notorious ex Mutt Lange, Freddie Mercury, Bill Gates, Jean-Jacques Rousseau, Ernest Hemingway and other luminaries. What did they see in this place that is called the “Swiss Riviera.”

When tangerine-coloured buildings no longer appeal to you, it's time to take a break.

Looking at the photos this morning, I realize it was all fatigue and no-common-sense that put us in that dour mood. The place is lovely.

We got off the train at Montreux during the lunch hour and made the steep walk down to the water for the requisite visit to the tourist office, which I am pleased to report was actually open. We have found a surprising number of tourist offices that are closed on weekends. The one in the Paris train station read it was “exceptionally” closed the Saturday we were there – by exceptionally they may have meant it was unusual to be closed that day of the week, but we think the French just like to polish up their every move, hence their tourist office closing stands out from all other tourist-office closings by being “exceptional.” In retaliation, we were “exceptionally” put out.

But to get back to this weekend’s wanderings:  Montreux has two “old towns,” a 19th-century quarter and further up the steep slopes, the 16th century village where our appreciation for old-architecture topped up. Looking at the bell tower of a stone church, I felt that my ancestors were absolutely right to leave this  continent at about the same time this place was laying its foundations. Who builds up this high, I wondered?

Of course, building among the clouds was likely part of why this settlement succeeded. They could see trouble coming from a far-off distance and plan their defense accordingly. 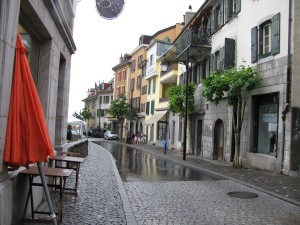 It was around 6 p.m. when we trolled these streets, which were empty due to torrential rainfall. Either that, or they knew we were coming. Why did this not enchant us? Tourist-burn-out.

Montreux is on the waterways that connect England and France to Italy, hence it has always been an important trade route and is home to a castle that has been part of that history for a thousand years.

I will write more about that tomorrow, but for now will leave off with photos that demonstrate the little-recognized phenomenon of tourist-burn-out, a condition that can only be treated by gazing on 1970s architecture, horrifying a remedy as that may be, it is the only thing that will recapture our appreciation for ancient European architecture.

Real travel tip: Montreux’s slopes are not only heart-stoppingly beautiful, they are also capable of stopping your heart. A 12-week cardio-and-strength-training regimen is recommended as preparation to walk these cobblestones. I wish I was joking about this.

We will have to stare at this modern monstrosity in order to regain our appreciation for 16th-century architecture. Ugh.

Hopefully this child never has to know the horrors of living in a modern apartment block, where the word "block" truly applies. See right.

3 thoughts on “Tourist burn-out in Montreux”