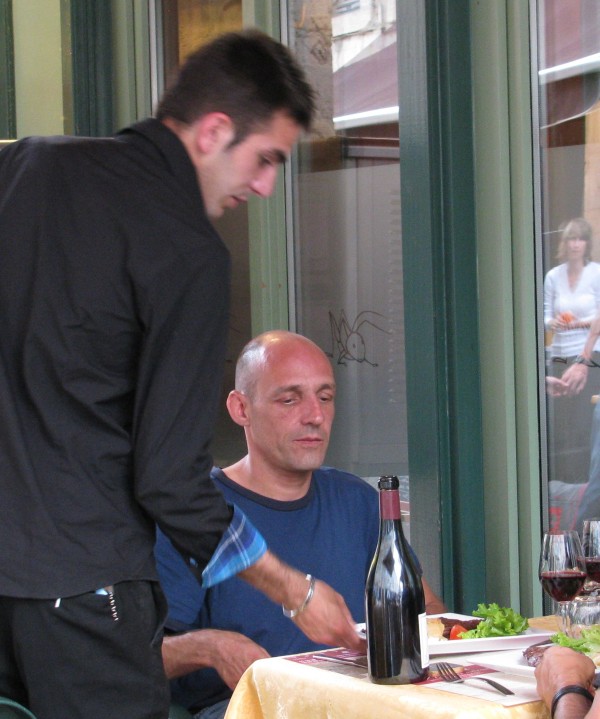 Photo captures male diner's facial expression as he absorbs yet another insult from his haughty French waiter. He revels in the satisfaction of knowing he is paying for the best arrogance France can deliver.

Dave and I arrived in a famished state at Au Grill’on, a corner cafe that wraps around  Rue JDV Proudhon and Rue Francois Louis-Bersot in Besançon’s old quarter.

As is our custom, we first whetted our appetite by scrutinizing the menus and clientele of about 12 restaurants beforehand, deeming each one unsuitable, until we arrived at Au Grill’on too tired and hungry to care about the quality of food or service. This was France, after all, where there is no bad food, theoretically speaking.

We parked ourselves at a table at the point of the corner to enjoy a commanding view of the pedestrian-fashion show going up and down both streets.  I stepped away to discreetly take a few photos of said fashion-show and when I returned Dave was seated at a new table.

The waiter, a young man who when he first appeared wore an expression so disinterested that it took a few minutes for us to conclude he was not a loitering Dylanesque artiste, had moved Dave to another table hemmed in on one side by what appeared to be a trash bin and on the other by an ad board.

Dave, being of English stock, did not realize the waiter was asserting dominance. I, having a good measure of pre-Revolutionary French blood, appreciated the artistry woven into this insult and drew my sword, figuratively speaking.

I moved us to another table. True, it was worse than the one the waiter chose, but there was no time to quibble. Dave, seeing he was but a pawn in our power-struggle, sighed and took up his newly assigned post. I wonder if we had kept on like that for 20 minutes or so how many tables we could have made Dave sit at. I would guess at least five.  He is a very good sport.

The view from our table.

The waiter, seeing he had a rogue diner on his hands swept by our table as though we did not exist, a sort of shot-across-the-bow move, then returned to our table and assumed a bored posture – his weight thrown to one side, shoulders slack, chest cratered inward and head slightly tilted as though falling asleep. I managed a few French words at which his eyes flickered with hostility.

Some say that everyone under 25 in Europe has a working knowledge of English, but the waiter gave no recognition of our English and even less of our French. We would have done just as well in Hungarian, even though neither of us speak it.

The waiter communicated in one-syllable words so low that they could have signaled a digestive complaint, but he toyed with our hopes by allowing a slight intonation of language into his grunts. He was a good-looking kid, but he somehow transformed his eyelids into shadowy hoods and his lip curled slightly upward while the rest of his facial features took on a gargoyle-like profile. 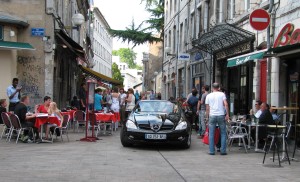 The view on the other side of the street - sure the avenue is jammed with tables and pedestrians, but why not drive a sports car through it? We've seen this in Switzerland and France - owning a sports car is apparently a license to drive anywhere, any time, any way at all.

You have to hand it to the boy. He should not be in some provincial backwater, but instead be waiting on tables in Paris where he could contribute to France’s international reputation for waiter-haughtiness.  We were delighted to finally get our money’s worth in cuisine culture.

Even though we communicated our order caveman-style, that is,  by pointing on the menu, le garcon brought me something somewhat different – and more expensive – than what I had ordered. He correctly detected Dave’s likability and first brought him his exact order – chicken breast, which came sans bone and skin in a  mallet-flattened filet along with a square of delicious scalloped potato.

Hopefully no waiter-spit is in here. This tasted a lot better than it looked, although I could not detect any garlic. The waiter must have reported my misdemeanors to the chef!

Then he brought my steak, which I had ordered, topped with what appeared to be giant raisins, which I had not ordered. I would have put up a fight about this, but I am still waiting for the day that a European waiter brings me the correct order, so I just picked up my knife and started hacking at it only to see my plate transform into a murder scene, complete with red blood pouring out into the beige-coloured sauce (a nice complementary colour scheme, by the way).

The waiter was winning.

I sent the plate back to the kitchen where for all I know the entire staff gathered around to spit on it.

When the steak returned, it was still rare, but it no longer flinched under the fork. It was perfectly tender, a good piece of meat, and although a little lacking in the usual hint of garlic for which French chefs are famous, it still was delicious.

The waiter, as is almost always the case with European waiters, had exacted his revenge by making sure I did not escape the region without dining on the local delicacy, morilles mushrooms, which is the name for the raisin-like globules atop the steak. It is hard to hate a waiter so wise.

The morilles added nearly 10 dollars (Cd) to the price, but were worth the freaky experience of having their raisin-ribbed surface tickle the inside of my mouth. Did I say it was freaky? It’s worth saying twice.

Sadly, their flavour is weak as compared to more common mushroom varieties.

Despite our waiter’s lofty ways, he was very quick with bringing the food, and I’m fairly certain he did not spit in it, although with all that sauce and crumpled morilles, who can say for sure?

One thought on “Eat on the street at Au Grill’on”