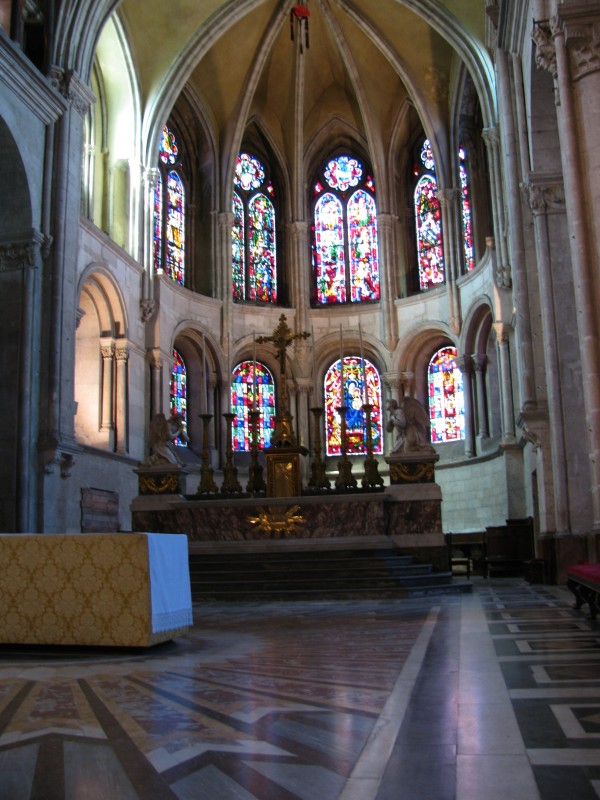 12th Century portion of Besançon's Cathedral Saint Jean. At least, that's what the guide inside the church said.

As is our custom on most of our travels, we made our first stop at Besançon’s tourist office so Dave could pose by it with a frustrated expression at finding yet another French tourist office closed on a weekend. They say retired couples should find a hobby they can do together and this is ours. 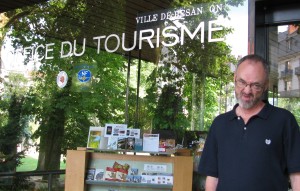 Dave expresses his opinion of France's tourism bureau, which laughingly seems to be closed just when visitors are most likely to show up. To be fair - this office was open the following day.

Then we made our way across the bridge to Besançon’s Ancienne Ville, an old-town that dates back to the 16th century, and even older is Besançon’s outstanding St. Jean Cathedral, parts of which herald from the 12th century.

Despite the fact that Besançon’s national identity eddied about in the streams of conquest (last post), it appears that its conquerors did more to build it up than to tear it down, and so for a small city, it has the pricy ambience of a large one. Some writers have described it as a miniature version of Paris, and rightly so.

Like Paris, it has broad pedestrian avenues flanked by stone buildings ornamented with elegant woven wrought iron balconies. Unlike Paris, its old town is impoverished when it comes to trees.

The stone streets are just that – horizontally laid stone blocks trimmed with the vertical stone of the buildings. On our first walkabout in the evening, it felt barren, but when we returned Saturday morning, the French compensated for the shortage of shrubs by filling the street with colourful bedecked citizens, caravans of cafe umbrellas and quirky street

Besançon's Revolutionary Square, which is a lot bigger than it looks in this photo.

vendors. This is not to say the city didn’t have greenery – it had plenty, just not in the old quarter.

Unlike Paris, Besançon does not strip visitors down to the last penny.  Visitors can sip on an espresso at a sidewalk cafe in the town’s broad Revolutionary Square for only 1.50 Euros. We almost fell off our chairs when we saw the bill.

And for those on a budget, a cheap lunch can be had at Besançon’s “Subway” sandwich restaurant – and before you turn up your  nose at eating at an international food chain, the French do things with bread even in a franchise operation  that seem impossible in North America. We handed over 12 Euros for a fresh lunch for two, thus allowing us to splurge on our supper bill.  Whether the supper was worth it, I will tell tomorrow.

A church in Besançon. Wouldn't it be nice if I knew its name?

Knocking on Victor Hugo's door - or at least, the door to the apartment building where he was born on February 6, 1802. See how I hang my head? It is from years of knocking on doors as a reporter, steeling myself for abuse. Let's face it, I deserved it.