Solothurn's St. Ur's cathedral roofline. We climbed up 250 poorly lit, uneven wood and stone steps to the top (see people there on the right tower - they look like ants. 15 minutes later, that's where we were). Because this was the trip where nothing went wrong, we did not plunge to our deaths. Nice.

My albatrossness began in early childhood, when my Uncle Guy gave me my first lesson in the fine art of fishing.

At 4 a.m. we hiked out to a sparkling clean river with rock waterfalls. At 5 a.m. we returned to the camper. Uncle Guy sported a hole in his ear lobe … this in the day before men got their ears pierced except in fishing accidents … his favorite childhood lucky fishhook was somewhere at the bottom of the river and my right leg was scraped up and down from plunging into a hidden rock crevice as we crossed the waterfalls, bringing the water right up to my chin.

Uncle Guy fished me out – the only catch of the day and one he restrained himself from saying he’d like to throw back.

A year or two later, my Aunt Rosie listened to Uncle Guy’s account and determined that the flaw was in the teacher, not the student. She took me fishing at Rainbow Falls in the Whiteshell. It was the first time she had ever seen anyone hook a seagull.

Fast-forward a few decades and my older brother brought his boat out to our cottage for a fishing excursion. It was the first time he had seen someone hook a loon.

The common thread in these accounts is not fishing, although that might seem reasonable. It is travel. In every instance, bags were packed, gas tanks filled and coolers jammed with sandwiches. It makes my one-city-four-hotels story of Paris appear in a new light.

It’s also why I’m a nervous traveler. I don’t think things are going to go wrong. I know they will.

This is what makes the last weekend so amazing. We hopped the train for a short 15-minute ride to Solothurn, a village so un-noteworthy that even Rick Steeves (our travel guru) gives it no mention in his guidebooks.

It turned out to be the best day-trip yet. And nothing went wrong, ergo I have nothing to write about it except to say that Solothurn, despite it’s somewhat weird name, is outstanding for its baroque architecture, narrow cobblestone streets, Italianesque styling and museums where entrance is by donation (we figure $10 is about right).

Click here to see a 54-second video of Solothurn’s marching band – sorry that my videography skills are substandard. I’m working on it. As Dave says, much would improve if I would just stand up while videotaping. I was standing up. 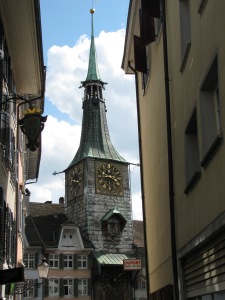