We woke up around 2 a.m. Saturday morning to the sound of a man snoring in our apartment.

This was not alarming until my jet-lagged brain realized that Dave was awake. We lay there in the dark, trying to imagine the breathing was coming from anywhere but inside our apartment. It was a weird snore – kind of airy like a woman’s, but too voluminous to be anything but male.

We tiptoed around and decided someone was sleeping up against our apartment door out in the hallway. 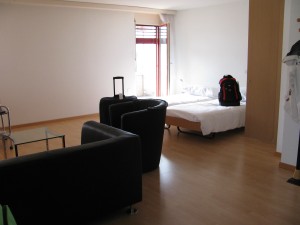 What ensued was a quiet conversation on who to call about this – Switzerland doesn’t have 9-1-1 – they have some other number that we could not remember, but it didn’t matter because we don’t have a phone line, which raises the little-known fact that foreigners have some difficulty in getting local services – a timely blog topic.

The trouble lies in that a person’s credit rating does not necessarily travel with them, so to the Swiss we are like two unreliable 18-year-olds without any credit history. Utility and rental companies also don’t enter into contracts with foreigners until they have a residency permit, which we are still in the process of obtaining (it will take about 10 more days).

And so we do things differently where we can – for example, Dave’s employer is actually the lease-holder on our apartment. They also send a staffer with us on all official business to translate, negotiate and berate wherever necessary.

In this we are lucky – anyone relocating without the benefit of corporate support is really out on a limb, both linguistically and bureaucratically.

But none of that was helpful as we tried to get back to sleep while a potential drifter snoozed only a few yards away. Finally, I got out my mag-lite flashlight, but not the right one. I left the big prison-guard type one back in Canada. This was my mini-mag – roughly the size of three BIC pens taped together. 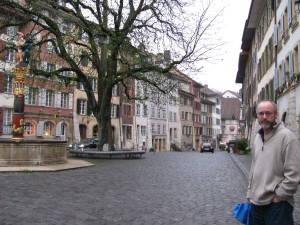 Dave on a 16th-Century street in Biel

Not that we had plans to assault anyone, even someone who was sound asleep. Despite the fact the government and utilities treat us like teenagers, we know we are over 50 and there are some things we just won’t do. Also, my mother is still alive and it would worry her to see headlines, “Middle-age Canadians in Melee with Swiss Homeless Man,” or the more likely headlines (because we are the outsiders here) “Hapless homeless man famous for saving cat from tree is attacked by unregistered foreigners.”

I worked in news;  I know this could very easily happen.

Like something out of a sitcom, only without the laughter, we leaned up against the door, brandishing our mini-flashlight and quickly opened the door to find … nothing. And yet, we could still hear the snoring as though someone were standing right next to us.

Further investigation led us to believe it was either the refrigerator venting (fridges here are different – as we learned when living in Spain, they have some strange gas-imbedded coolant system, the details of which I do not understand and therefore readers will be spared any further explanation).

And now it is Saturday morning and we are on our way to the open-air street market, and later to Bern where Dave thinks we will do some sightseeing, but I will, in fact, search for an IKEA. 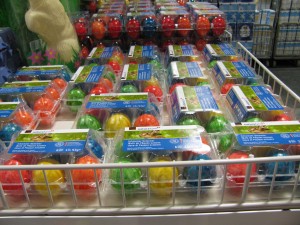 Easter eggs a la Suisse. They're real eggs - we did not buy any to investigate whether the dye seeps through into the albumen.