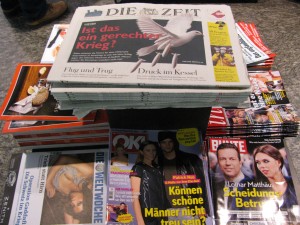 I studied French for three months to get ready for living in Switzerland. Apparently, I made a mistake.

Things are looking up. Early this morning as we enjoyed a wonderful breakfast in the Hotel Elite’s posh dining room, a waiter with a heavy accent asked if we would like him to take our photograph together.

And then I lost the digital photos – some how. Some way. It was wonderful.

After breakfast we trundled down to the Hotel Mercure to meet a representative who would walk us through our setting-up day. We waited around for an apartment rental agent who showed up fashionably attired and fashionably late. As per usual, she forgot to bring the right key to show us the apartment, but then we lucked out and discovered the cleaning staff were inside and the door was open.

Having seen  plans that took months to build fail at a rate of one-per-hour over the course of a single day, we took a run at the apartment as though we were hipsters. We didn’t ask all the important questions, paid almost no attention to any details because hanging over our heads was the biggest question of all: Why bother? If we learned anything this week, it is to be reckless. 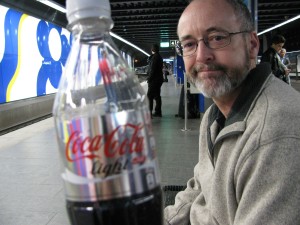 Evidence of a parallel universe: Coke Light instead of Diet Coke.

Next came our visit to the police station for our residency papers where a genetically linked version of Attila the Hun in menopausal-woman-form handled our file. I’m not insulting her when I say “menopausal,” because I’m in that state myself, but she looked really bitter about her hormone depletion. Me, I’m too sleep-deprived to be bitter.

As one would expect, she grimly informed us that there were not enough signatures on our apartment lease. She said this in French but I understood her perfectly owing to our parallel menopausal status. I almost congratulated her on the way out. You have to respect a woman who can glance at a bundle of officious documents and pick a needle out of that haystack to make our introduction to Biel just a little more cumbersome.

manager was away. Again, I understood every word. There is something about rejection that I am growing to recognize.

After some verbal rough-housing with our representative, the papers were signed and we went back to the police station where we had a non-menopausal young woman process our application, and things went much better. Nevertheless, while we were told we’d get our permits today, turns out it could take another week or two. Naturally.

On a more personal note, without the benefit of my hair “toolkit,” my hairstyle grows more exciting everyday. Pictures will not be posted.

2 thoughts on “Day Two in Switzerland”