Blame literature. I am a lifelong insomniac, an affliction that in its early stages had me sneaking my lamp into my bedroom closet where I soaked in the company of many a weird book, all so my parents wouldn’t notice the light under the door while I read late into the night. Technically, this makes me less of an insomniac and more of an obsessive-compulsive reader for whom every book is a “page-turner.”

By weird books, I don’t mean anything as terrifying as monster picture books, unless you want to include Wuthering Heights, and other Victorian-era missives, which when you think about it, are monster stories. This explains so much about my knee-jerk expectation that things will always go wrong.  A steady diet of Charles Dickens does terrible things to a pliable mind.

This unusual reading list through my elementary school years had everything to do with poverty – not that my family was down-in-the-dirt poor, but we were too poor for many children’s picture books, if any – I don’t actually remember anything but printed pages full of text until I hit school, but for my older brother’s school reader, Dick and Jane.  Then my younger brothers came along and entered the land of Dr. Seuss’s green eggs and ham, a line of fables that I rejected because none of the Bronte family mentioned green food or if they did it was in the context of having to consume mouldy spoiled fare. So the only books handy to me at home were those that came in my mother’s affordable subscription to a buck-a-month Book of the Month Club, the collection of which was entirely based in The Classics. 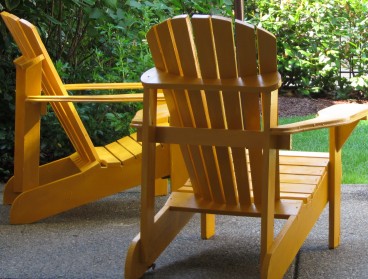 These chairs have nothing to do with this blog post. I've included them to offset the nightmarish gargoyle photo, although they do make a great place to read on a warm spring afternoon, and this post does talk about reading, so I take it back about the chairs being out-of-place.

My gloomy outlook did not improve much when the book club acquired a ‘children’s list,’ which included the unwashed version of Hans Christian Andersen’s Fairy Tales and the Brothers Grimm in a two-in-one book volume where you flipped the book over and upside down on the other side was another whole collection of horror stories crafted especially to keep children in line. My mother thought Black Beauty would be a good read, so she ordered it, ushering in my introduction to the world of animal abuse.

It was handy to get my Grades 11 and 12 reading list out of the way before puberty, but awkward to arrive in Grade One without a clue about even a single Mother Goose rhyme and to have only the most scant familiarity with Little Red Riding Hood. Worse yet, because I was an early reader, every teacher assumed I knew things I did not, such as the alphabet. It was a miserable day in Grade 4 when Miss McMurray laughingly said, “Let’s review the alphabet, although I’m sure you all know it.” The class laughed, because they knew that in fact, I had never been able to recite the alphabet, an educational oversight that branded me for way too many school years.

All of the above is a long way of explaining that I was up past 4 a.m. last night, which is not really that unusual, but it is not a good thing when living in a hotel bachelor suite where my beloved husband is trying to get some sleep because he has to go to work in the morning. I lay in bed and stared into the dark until after 2 a.m., but then had to get up because there is only so much blind-staring I can do at a stretch.

But in 102 days, we will have a bedroom with a door on it, and I will be able to tiptoe into the living room and read away without waking anyone. Bliss.