What you see below is a weather forecast for our little town of Biel from March 27 to 30.

Last spring, the reported highs were hitting the high 20s, but our town’s temperature tower was showing 36 C and upward.

What does this tell us but that Biel does not have its own weather station and is drawing reports from somewhere else. I would like to know where that somewhere else is exactly, because I like the weather there better than here, wherever “there” is. 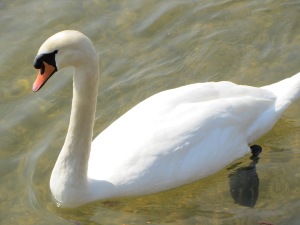 Sweltering swan. How do they always look so graceful? In unrelated news: Last night we watched some competitive kayakers race swans down our town's canal. It turns out swans are very swift. They're not above cheating, either. When they were about to be overtaken, they just flapped their wings and motored out of there.

This is not to complain, but only to say a little more accuracy in reporting would be nice. Last year, we landed here on April 1 to discover the locals were already swimming in Lac Biel. Lac Biel is a not a shallow swimming hole. It has a surface area of 39 square kilometres, and is the basin for the Jura Mountains to a range of 8,300 square kilometres. This is nowhere near as big as Lake Winnipeg (surface area 24,500 square kilometres and cachment area of almost one million square kilometres), but neither is it a pond. It is huge, and so for it to be warm enough for a dip suggests a sustained high temperature through March on par with Canada’s prairie summers, which is to say: Frying Pan Hot.

I was prepared for a cool Swiss spring, not a sizzling summer in April, so I had to ditch my clothes and buy a whole new wardrobe, which really wasn’t such a bad thing, although it did make Dave groan, a lot.

The variability in temperatures isn’t really that big a surprise in Switzerland’s varied topography. Similarly, Vancouver Island has so many ‘micro-climates’ that in some parts of Victoria, tropical gardens flourish while in other pockets, gardens grow at a glacial pace.

The oddity in this that the Swiss don’t seem to realize it is warm outside. While I attract stares when strolling around in a tank-top, capris and sandals, those around me are in leather jackets, their necks swathed in scarves and heads covered in hats. It is as though they believe the temperature forecast more than their own body’s internal temperature sensors.

Today’s forecast is for 14 C according to one weather website and 20 C on another. I’m dressing for 30 C.