I get lost almost everyday, so poor is my sense of direction, but Dave is of another breed, a type that innately knows where he is all the time. This is one of the reasons I married him. He works better than a compass and comes with the added bonus of holding my hand when leading me around. Compasses are not so compassionate. Also, I keep losing my compass. Dave is a foot taller than me, so I can usually find him.

In a rare moment this weekend, however, Dave was as lost as I, and I blame Basel for this. Look at this map:

Which way is north and south is hard to say when you're in this maze.

We ended up turned around somewhere near Bartusserplatz, a name that to the English ear sounds like a bit of a joke, and that is what we thought the tourist office was playing on us. We roamed the streets in the rainfall, in something of a daze trying to find the city gates, which really are worth finding. They are classical medieval gates that bring to mind Europe’s castle-storming history. 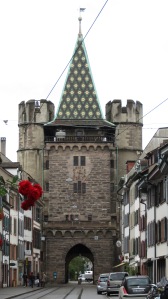 Basel Spalen city gate dating back to sometime between 1080 and 1398.

The city was once surrounded in walls and splendid gates, but in 1859 a city council decided to demolish the whole works but for a few gates, which goes to show that the stupidity of city/municipal councils is a time-honoured tradition that carries on in a lively manner even today, especially in Victoria, B.C., where the regional overseers allowed a crazy-8 traffic circle configuration on an uncluttered highway that serves the airport and ferry terminal, giving tourists heart stoppages in unknown numbers. But I digress…

We often walk about 12,000 to 14,000 steps on a single day of touring, but in Basel we went over 20,000, marching almost 9.5 miles, of which at least six miles were spent completely mystified over our location.

We have come back from this fog with advice for those aspiring to visit Basel. Here it is: