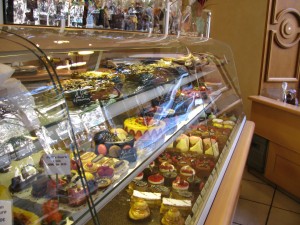 Sweet treats and good rib-sticking eats all in one shopping spot at French bakeries and patisseries.

The first question is why would you want to eat a lamb’s kidney anyway? Gross.  That aside, French food enjoys a reputation that tops all others, but do they deserve it?

It’s easy to trot into France’s finest restaurants and emerge satisfied that the nation’s cuisine is all that is claimed. But what about those of us who blanche at $75 lunches? What is French food like for the mid-to-low range diner? Does Paris even have a mid-to-low-range dining echelon?

We-the-cheap conducted an in-depth 48-hour study on this topic. Here is what we found.

Patisseries/boulangeries, that is, combination pastry and bakery shops, are great sources for not-so-expensive, but still delicious, day-time meals, and these shops are everywhere.

Aux Armes de Niel, the  boulangerie (photo above)  at the corner down from our hotel sold soup-bowl-sized take-out quiches and other sustaining  foods (mini-pizzas, although I don’t know if they called them that) for under $10 each.  The alternative was our hotel breakfast at 20 Euros, that is,  over $30 Cdn. each. No thanks. 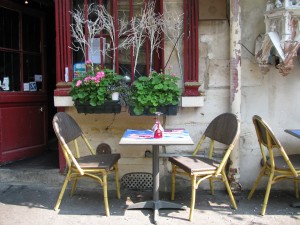 400-year-old French cafe. No one was there. We're not saying this suggests that its age corresponded to the length of time customers waited for a meal, but you have to wonder.

It also sold fabulous overfilled cream pastries, if such can be said to be truly over-filled. After all, this is whipped cream. There’s never too much of it, so the French seem to think and, after sampling the goods, we agree.  The pastries themselves were heavenly- flakey, light, everything Pilsbury dough-boy claims, but is not. French pastry is a perfect jacket for French fillings and toppings.

If you’re deciding between French ice cream and French pastries as your guilt-food for the day, pick the pastries. The ice cream is good, but ice cream tops out at a certain point anywhere in the globe and I can prove it by producing homemade ice cream at my Ontario cottage that could stand up alongside the French’s. Note to cottage guests: But I won’t do that, because summer is the time to laze on the dock – not a good place for churning ice cream.  Note to those searching for the greatest scoop of ice cream: Head to Atlanta, Georgia. Break into any home-kitchen and demand the contents of their churn. Seriously. You will not be disappointed. 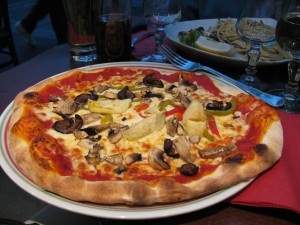 We scoured the streets for under-$30/person fare and found a few places, such as the San Remo’s Pizzeria near the Place de Marechal Juin roundabout and Pereire metro station.  There, I had a delicious vegetarian pizza with artichokes that did not appear to have ever graced the insides of a jar.

Dave had the grilled salmon and spaghetti alla chitarra, a substantial thick spaghetti noodle cooked to just the right degree of resistance and subtly seasoned.

With a glass of the house wine and a beer, the total came to $36.90. Shocking, all the more so for having been so delicious.  The atmosphere on this Paris sidewalk cafe was great, too. The staff (probably Italians) were nowhere near as snooty as French servers’ reputation suggests.

Tomorrow: Dining on the Champs Elysees – Can it be done for under $70 a person?

4 thoughts on “Paris food – can you eat lamb’s kidney without having to sell your own?”