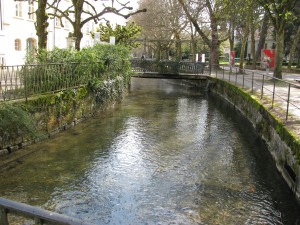 A secondary canal in Biel. Locals here think this town is trash, but I don't see anything wrong with it.

It is our first Monday in Switzerland and Dave’s first full day at work, and so now we settle into whatever normal looks like for our time here.

Of course, there is no “normal” yet – there’s too much we don’t know about this country, mostly because we are arrogant Anglophones and not very good with the local languages, although, I am improving.

I managed to tell a shopkeeper her wares were too expensive (tres cher), but only for today  (seulement pour aujourd’hui) because I had topped out my shopping budget and I would be back (retourner moi – although, I’m not sure about this particular phrase, maybe it is retournez moi).

No one has slapped me or thrown out onto the street, so I suppose my French is not so bad. 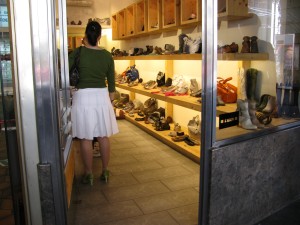 I’ve also discovered that  European arrogance about fashion is well-deserved. Ordinary shops here carry fascinating clothes – some too fascinating for me, and others that are very forgiving for my middle-aged figure.

And for reasons I cannot yet unearth, shoe stores are everywhere, even in the farmers market. 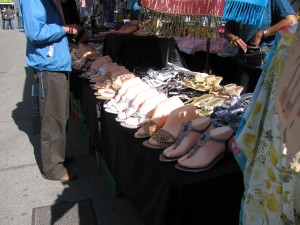 Within a few blocks of our home are three large grocery stores, making downtown living very easy. To put that in perspective for Victorians, imagine seeing a Safeway at Broughton, Fort and Pandora, or for Winnipeggers, grocery stores at Portage, Donald and Hargrave.

The police here are invisible. Where Victoria Police can be seen biking down Wharf  Street, Saanich Police cruising down Tillicum, and the RCMP just about anywhere at any time, we’ve only seen the Swiss police on the streets twice – at the Tamil demonstration in Bern and a few blocks away corralling an intoxicated man outside a grocery store.*

* It may look odd that I list three police departments when describing Victoria, B.C.’s policing, but that is what there is. Victoria-regional law enforcement is made up of multiple municipal forces.