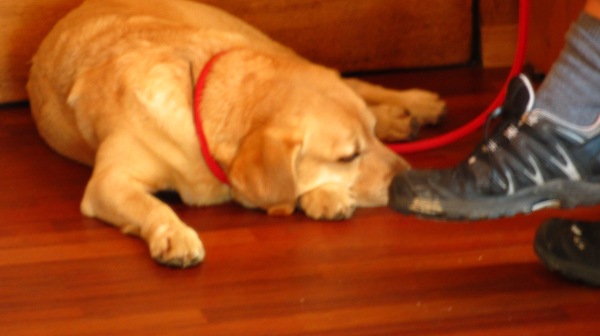 A dog snoozes at his owner’s feet, happy inside a Starbucks restaurant.

A dog attacked me on my morning jog yesterday. It was leashed to a young woman who only laughed as her snarly snapping border collie made a go for my shins.  I say “only” because she showed no reflexive movement to her dog’s lunging at me. A little jerk of the leash would have been nice, but that did not occur.

That is about what I expected.  My experience of dog-owners, particularly owners of aggressive dogs, is that they are clueless about their beloved Bowser’s behavior, because they are at the tail-end of the leash. The view is different from the other side, the one with fangs.

This brought to mind my hometown Victoria, British Columbia, where tightened leash laws came into force this week, a move that I doubt will do much except produce a more stressed dog population.

I loathe it when North Americans shore up weak arguments with “that is how they do it in Sweden” defenses – a lazy myopic debating tool if ever there was one, mostly because people using that device are operating with a scant understanding of how Sweden or any faraway land really works. But here I am about to dive in with a “this is how they do it in Switzerland argument” against tighter leash laws. My only defense is that I live in Switzerland.

Over the past year, we have seen countless unleashed dogs of all breeds trot past us with nary a glance in our direction. Un-neutered males frolic in parks, beagles bumber about inside housing goods shops as their owners browse, retrievers relax under restaurant tables and  train-riding chows tolerate total strangers stepping over them. Unleashed dogs walk at a perfect heel on busy streets and in packed parks. A dog is a dog the world over, so the difference has to be something to do with the Swiss.

I had previously believed Swiss dogs’ docile natures was a product of their socialization – that is, that they are allowed nearly everywhere: Trains, buses, stores (some restrictions apply inside grocery stores), malls, wherever there are people, there are dogs. I assumed this to be the driving civilizing effect on canines and very likely this is the case. But there is more to it.

Switzerland is swathed in bureaucracy. For example, no one is allowed on a golf course until they have been certified. It seems a bit far-fetched but there it is.

The same thinking applies to dog-ownership. Switzerland demands that dog-owners become certified before they actually own a dog, and certification does not mean just paying a fee and getting a piece of paper; it means taking a course in dog-training. After successfully completing the course, the person then gets the dog and later goes back for further training and certification.

Fifteen months ago, learning this would have made me roll my eyes and groan at an all-reaching bureaucracy, but now it seems like a very good idea. It elevates the general base of knowledge of all dog-owners. The result is a very polite pooch population.

A leash law would not have done anything to protect me from yesterday’s dog-attack. The problem was not with the dog on the leash, but with the obtuse woman holding the other end of it.

Canadian humorist and economics professor Stephen Leacock once wrote that after the Second World War, Europeans were left to grapple with these two facts:

Rooftop courtyard and green space imbedded in Manor, Biel's largest department store where the top two stories are of condo-apartments. The town has many rooftop gardens.

He wasn’t making light of war’s devastating effects, but pointing out that architectural opportunity was out there in that cities could be re-imagined into something better. Did it happen? Who knows for sure? Evidence does exist, however, that suggests Europeans have a handle on urban living.

Take a Google Maps birds-eye view of  a city’s downtown such as Victoria, British Columbia and you will see whole city blocks engulfed in monolithic structures (the street view is more charming, but bear with me for a moment). Then, take a Google Maps birds-eye view of Biel/Bienne or even a larger city such as Bern, Switzerland’s capital, and you will see green punching through the heart of the city’s downtown blocks.

This house, grand by Swiss standards, is tucked between apartment blocks and townhouses.

The greenery sprouts from courtyards (both rooftop and ground-level) and rivers of lanes, sometimes so narrow so as to appear to be sidewalks. Often, behind those curb-hugging buildings, one can find hidden villages of smaller townhouses, coachhouses, cottages and even grand homes.

I don’t want to damn North American cities with faint praise, but they sometimes seem to be thin on outdoor nooks and crannies. Here, when we bumber about cities of varying sizes, we find any number of them in the form of squares, courtyards, pocket gardens, and parks. It as if the Europeans found urban life so exhausting they were compelled to build plenty of resting spots to get them through their day.

This may not be fair. Europe and America may be apples and oranges in such things. Europeans may have more public spaces, but they are more apartment-dwellers so they need them. We North Americans tilt toward spacious suburban life that allows generous private gardens (or trample zones, as our yard was when the kids were growing up).

Here’s a peek at a few hidden corners and lanes in Switzerland. 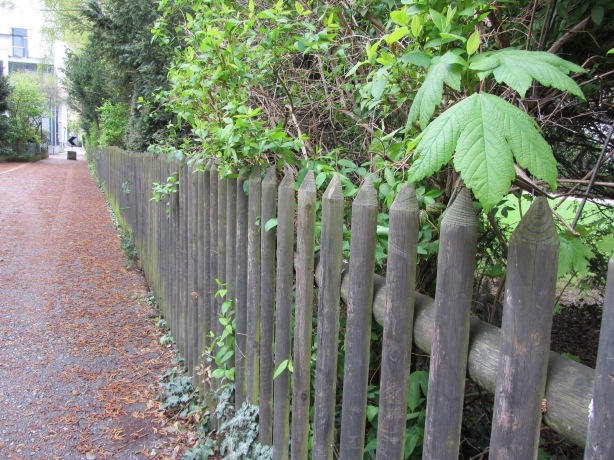 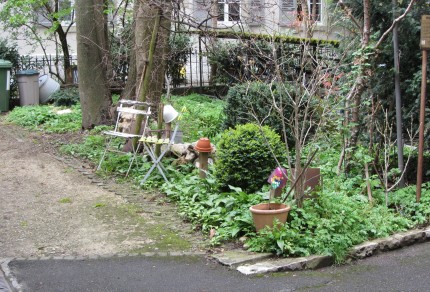 Gardens grow between apartment buildings - some elegantly coiffed, some left to spill over with vines and greenery.

Courtyards are common in our Swiss town. 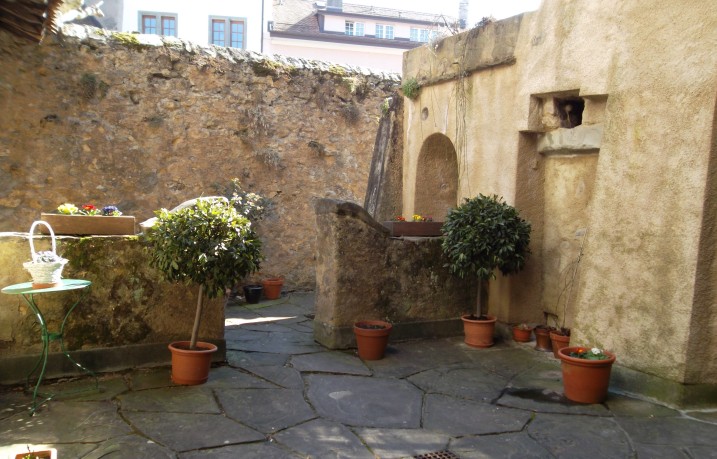 A charming flagstone courtyard that we snuck into while near Lausanne, Switzerland. One of the apartment dwellers caught us poking around, but she was friendly about it. How can you not expect uninvited guests when your front door opens to this?

Biel/Bienne beach gets a summer face-lift.

We took a 15-minute stroll down to the lake last night and discovered it had gone tropical.

Last night, we found a corner had been barricaded behind unpainted plywood walls, its pebble and asphalt ground topped with 132 cubic tonnes of fine quartz  sand four-inches deep. The park benches had disappeared, to be replaced with potted tropical trees and rambling open-air wood cabanas serving up food and drink.

Wood boardwalks already made gritty with foot traffic led past a discreetly tucked-away public washroom trailer. The sandy spans between the boardwalks were furnished in wickery loungers, tables and chairs, as well as what can only be described as beds. It was all lovely. 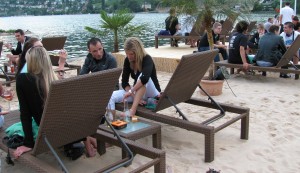 I am not enthusiastic about alcohol-service in a park, however, the clientele looked dignified and sober, but that was at 9 p.m. I cannot say what it looked like at a later hour.

For those Victorians reading this, imagine the screaming that such an undertaking would create back home in Victoria where a good stretch of the urban waterfront is paved parking lot, and should an ice cream kiosk dare to brave the virgin cliffs along Dallas Road, it would be met with the city’s version of a lynch mob, that is, a preservation society that would quickly douse the vendors in letters-to-the-editor and petitions.

While we’re on the topic: Victoria and its neighbouring communities are home to almost 100-km of trails that run through rainforest, oceanside and farmland vistas, and yet only two public washrooms can be found along the trail. It’s as though the whole population gets by without bladders.

Meanwhile, the Swiss look at a beautiful lake, and think “wouldn’t sand be nice right here, along with some place to get a snack,” and then they do it.  No protest, just plenty of Swiss out along with two Canadians,  enjoying the lake air on a hot summer evening.

Addendum: I have since learned that the city of Biel/Bienne funds this seasonal oasis. It is set up every year and taken down in the fall. The city usually removes the sand, but sometimes spread it out over the pebble base, instead of trucking it away.

Dave wanders into the park and wonders, where the heck did all this sand come from? And the beach furniture? And the hot dog stand?