Our first stop in Vienna: Schonbrunn Palace, where we arrived shortly after 8 a.m. due to our early morning train arrival. It turned out to be a good thing, because even in December, the place was filling up by the time we left a few hours later.

Also, not really true. Yes, there are fabulous flight-deals to be had, but here’s the fact: Even a one-hour flight will take a 1.5-hour train ride to the Zürich airport, which itself takes 2-3 hours to navigate thanks to the presence of line-ups like we’ve never seen before. Also, for some reason the Swiss believe that taking a direct route to anything only allows too much lounging among its passengers, creating an air of sloth, and so the guided march through Zürich airport is something of a maze that loops passengers through much of the airport, only to end up back in the same zone from which they passed through 20 minutes earlier.

I wish this were not true, but it is. I like a stroll as much as the next person, but not so much when toting luggage, worrying about border officials, and getting the impression from the forced march that our gate is in the next Canton. If it’s rough on me, a daily walker, I can’t imagine what it is like for those whose fitness level lags. Possibly these marches are a survival test to weed out the weak. 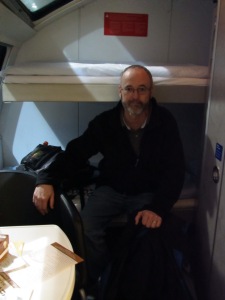 But I drift. All of the above explains why we favour train travel, even though it appears to take longer than fly-time, which it usually doesn’t. For example, the total train, plane and automobile trip to Leipzig from our hotel is about eight hours – the same amount of time as it takes to take the train alone, with much less stress.

Our trip to Vienna and Bratislava was made on the overnight train that departs Zürich at 10:30 and arrives in Vienna at 7:30 a.m. The whole price for two adults to travel return was 700 Swiss Francs (CHF) to ride in the luxury compartment that has its own bathroom complete with shower, a double bunk, plus a small seating area with a cafe-sized table and two chairs in front of large picture windows to enjoy the views. To ride in the compartment without a private bathroom costs 24 CHF less. We only know this because Swiss Rail messed up our booking and we ended up in the second-rate compartment on the trip home. It was a sardine-can experience, but not too bad.

A note to the weighty and heighty: The bunks are very narrow.

700 CHF is a lot of moolah, but here’s a little market comparison on our upcoming trip to Venice (I am too lazy to figure out what it would have cost for a flight to Vienna). We are taking a day-time train leaving at around noon from Biel, switching trains in Bern with a short stop in Milan, then on to Venice for 630 CHF for two return tickets.

If we were to fly, the total cost would have been 500-580 CHF. We would have missed the chance to stroll through Milan, and the fun of a train ride through the Swiss Alps. The total travel time on the train will be seven hours (including the one-hour stop in Milan).

The travel time by air with the train to Basel (where we could catch a flight), plus the requisite two-hour airport-waiting/marching time and fly-time would be five-to-six hours, not including the time it would take to find our hotel on the other end, which would probably be an hour, bringing the grand travel time total to, you guessed it, seven hours.

Pack as lightly as possible for train travel. Even luxury compartments are small.

Part of which would include the indignity of passing muster at airport security.

This is nothing to say of the varying environmental costs. I admit, I don’t pay attention to the environmental impact when I’m travelling, but I’ve noticed rigid environmentalists travel as much and more than I do, so I don’t feel bad about that. But if an environmentalist is reading this, shame on you for travelling by air. It sucks up the fossil fuels to a Suzukiesque-screaming degree.

Note: If we lived in a big city with an airport, we might fly more often, but we’re 1.5 hours away from major airports by train.

Second note: Another intriguing aspect of train travel is the immersion into local culture. When riding in the regular cars, you are surrounded by the locals as they go about their regular lives and it is something of a sight to see. For some reason, air travel has a socially insular quality to it, perhaps because the seats all face forward. On trains, passengers face one another, allowing for easy observation and the opportunity for conversation.