We trolled through Zürich’s Christmas Market last weekend, taking in the heady aromas of gluhwein (mulled wine) and rotting cheese.

The Swiss don’t consider it rotting cheese, but whatever they call this bacterial mould thing, it reeks so badly that I have not been able to get near enough to learn its name.

Despite my aversion for puke-stinking cheese, this concoction must have something going for it, because people line up in large numbers wherever it is served. Dave has tried to convince me to take a bite, but the tidal gag reflex kicks in and I can not.

Christmas decorations at the Zürich market.

In my former life as a staff reporter, I was called upon to cover festivals, community art shows, markets and the like. This does not make me an expert on their qualities, but it does put me into “observer” status, and so here’s the scoop on street markets. You don’t have to go to the big city to get the best stuff.

On British Columbia’s Vancouver Island, Victoria has a grand Christmas market, that I will not name here, that is posh, well-promoted and high-profile. On the other hand, the country-cousin markets in Metchosin, Sooke and Sydney are cobbled together in an earthy fashion with goods laid plainly out on tables, their actual makers (or a stand-in relative) posted behind the wares. The decor amps up a little sometimes, but mostly that is what it is.

They may not have as elaborate a set-up, but the goods have a genuine homegrown quality. 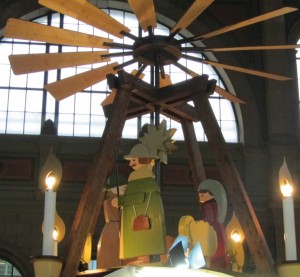 Take for example Sooke’s leading jam and preserve artist, Mary Holland*. Her goods are made from her own garden produce, and she comes up with flavor combinations that are so delicious, even I, the fussiest eater in the world, cannot resist them, slathering them not only on fresh bread, but on hamburgers, chicken, hotdogs, everything. Yum.

Nothing at the glorious urban market comes even close to Mary’s preserves. Just so everyone knows, I don’t use the term “jam and preserve” with the word “artist” all that often. My vernacular is not constructed to adopt passing fancies of language. A jam-maker is a jam-maker in my dialect, however, Mary has elevated the practice into artistry. There, I said it.

What does this have to do with the Zürich Christmas Market? Maybe nothing, but at this moment our town’s downtown streets are crammed with little sheds being decorated for its market. It will not have a glamorous Swarovski-crystal bejewelled Christmas tree towering over it, as does Zürich’s market, but maybe it will have homegrown goods that match the scale of Sooke’s, and possibly exceed that of Zürich’s market.

I don’t know yet whether it will, but I know from experience that it is possible.

And there’s nothing wrong with Zürich’s market. Just saying.

*She and her husband Steve run Little Farm – Mary’s Medleys in Sooke.