I have had less than five hours sleep over the past 48 hours – or is it 60 hours? Who knows? Overseas travel has addled my brain, so please excuse any craziness in this post.

Yesterday, almost everything went wrong, just as expected. This is “travel” after all, a word very much like travail.

We saw early clues that things would not go as planned: A delayed flight caused us to miss our connection; then more ominously, when the Air Canada agent called down to baggage to pull our suitcases, no one answered.  Wherever the baggage handlers were, they must have stayed there for six hours – the length of time they had to reroute our baggage, which as I’ve already pointed out – they did not.

Finally, instead of giving us an electronic ticket for the new flight path, the agent handed us an old-fashioned paper ticket, at which point my over-planning, hyper-compulsive organizational neuroses snorted awake and kicked my adrenalin into gear, but I told it to go back to sleep. Stupid me.

That one little failure-to-react-to-administrative-bungling led to ruin,  and by ruin I mean ruined appearance. Our baggage stayed in Vancouver, and so for the moment, I’ve lost my make-up kit, my hair-styling toolbox, 98% of the clothing I packed for over here – the whole shebang.

Thusly, unsupported by all the implements that make me reasonably presentable, I am wandering around Switzerland in a troll-like state.  It’s okay. This is Europe, the land that brought the Hans Christian Andersen fairytale troll to the world, and so I fit right in. All that’s missing is a bridge to crawl under.

The real fun happened, however, when we arrived at the Swiss Air gate at Heathrow where a boarding agent refused to accept our Air Canada paper-issue ticket and boarding pass.

Dave went into speechless gasp mode; I went into ‘not-gonna-take-this’ mode, and launched into a “You may not care about us, but you’re violating your code-share contract with Air Canada and Star Alliance” argument. This must be done carefully, because it is a London airport and disgruntled passengers’ attitudes can be readjusted with the light application of a Taser.

I don’t actually know this. I just suspect it.

But to get back to the agent who was dismissive as only people who deliver devastating news can be: We held our ground until a manager came over and menacingly informed us that they had our credit card information and were prepared to use it.

What did he mean by that? We are nervously watching our credit card balance to see if he went out and bought a car at our expense, but really we are at the point where we don’t care – just as long as they let us on the plane, which they did eventually.

It makes one wonder if we were mere moments away from starting new lives as homeless people in London. Is this how it begins – a little bump off  aircraft in a foreign country, credit cards and all financial resources abducted by surly airline staff, followed inevitably by sleeping on cold pavement, eating in soup kitchens, wandering Hyde Park, that sort of thing.

In Zürich, Dave sailed through the passport check, as is normal. He has on-sight likability so even when his papers are not exactly correct or he fumbles, people smile warmly and wave him through. 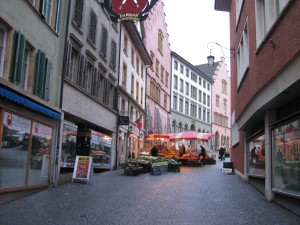 Charming Biel/Bienne, which our hotel clerk says is a "dump," but we think it looks fine.

I, however, do not have this innate charm.  People glance over me once and know right away that I’m related to people who were shipped off to Siberia. Europeans in particular can sense this, and so the border official grilled me to well-done before stamping my passport.

Moments later we discovered our luggage was missing. It made sense and we felt a certain calm in the universal consistency that nothing was going according to plan.

Bereft of our earthly travel possessions (aforementioned make-up, hair styling implements, etc.) we made our way to customs, taking a wrong turn at the last moment and finding ourselves un-inspected and in Switzerland. This is a moment when everything goes right for Dave and he moseys along to his train. It is usually a moment where I get arrested/apprehended/turned-back/sent-to-Siberia for 25 years.

For once, that did not happen. We found the train, a few good shoe stores (to settle my nerves) and then our hotel.