…… have just learned that only Dave’s visa has been approved. Drama!

Murphy’s law: Just as I finished up the last post about “no news on the visa,” an email came in from the  Consulate. The visa is ready.

Visa-watch Day 3: Nothing.  Just as expected. 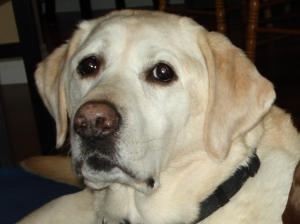 Our dog, certified for global travel by Canada, Spain, the U.S. and Australia. Thank you, Spanish immigration services, who by the way, never asked to see his documentation when we arrived in Madrid.

In 1998, Dave was offered work in Madrid, Spain. With assurances that a visa would take only four months to process, perhaps quicker because Dave’s employers hired “international transfer professionals” to hurry things along, we started packing, said good-bye to everyone in a flurry of farewell dinners, sent Boy-the-first over to school in Germany so we’d be on the same continent (he was university-age by then), and notified Boy-the-second’s school to prepare his transcripts for transfer.

And then waited another year before the visa was approved, raising suspicions that we harboured a seamy criminal past that was so unsavory even the Spanish couldn’t abide it.

And so as the year-long wait waxed on, exchanges of this sort grew: At the grocery store, a cashier asked, “Aren’t you supposed to be in Spain?” causing the other cashiers and a mob of shoppers to freeze, turn their eyes on me, waiting (hoping) for a public confession (small towns really operate on this “choral” level – live in one and you will know).

This happened when I filled up the car with gas, picked up Boy-the-second at school, showed up at committee meetings, ordered prescriptions, browsed books at the library, mowed the lawn, gathered my mail … you get the picture.

Meanwhile, Spanish bureaucrats had their fun with us, making us race around getting our dog certified by the Canadian Food Inspection Agency for transport (the word “food” in the certification process raising our suspicions about the Spaniards’ intentions), getting police clearances from everywhere we had lived before, even for our sons who were minors on all our past relocations, getting our fingerprints at the RCMP station, and letters from our doctor swearing we didn’t suffer from psychosis, parasites or dreaded diseases (true – I just found those letters while clearing out some old files last week).

But what did we expect from a country famous for the Spanish Inquisition?