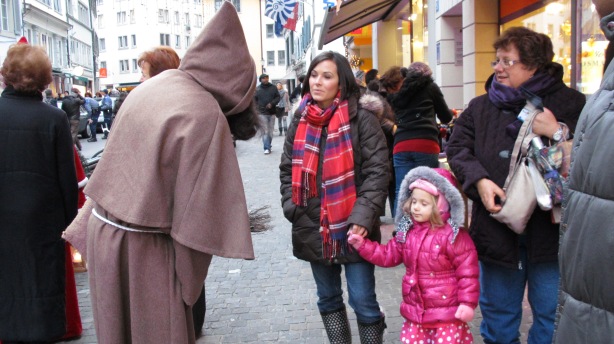 Watch out, little girl, you might get a SMACK!

It’s not everyday that an old guy spanks me with a broom and walks away without a bruised solar plexus.

But we’re in Switzerland, and when in Switzerland, do as the Swiss do, which is to tolerate stranger-on-stranger slaps. The stranger in question was Schmutzli, a dark-natured counterpart to a Santa Claus-like figure whom the Swiss assure me is not at all a Santa Claus, but a Swiss Father Christmas. Santa Claus, it is said, is a North American creation. I’m sure someone will argue with that, but that is how the Swiss see this.

Wherever Father Christmas strolls the streets in his characteristic red costume, Schmutzli is not far away in a hooded brown monkish robe, brandishing a twig whisk with which he punishes bad children, or if there are no children around, a middle-aged woman who mistakenly comes within reach. 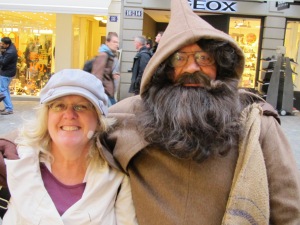 The Swiss are a fun, friendly people, even when they roam the streets beating people with sticks.

Schmutzli later informed me that he was paid by the municipality to play his role, and that Zürich has plenty of Father Christmas and Schmutzli pairs roaming the streets. Nice work, if you can get it.

Smacking strangers in a tourist-district, however, calls for a certain amount of diplomacy. First, Schmutzli is in costume, which makes him appear less threatening. Second, as he delivers the spank, he smiles benignly and applies only a light, judicious touch, cause who knows, maybe someone has grabbed him by the neck and pushed him into the ground before, such as a woman fresh off the plane from New York or perhaps he has met my Aunty Rosie.

And finally, Schmutzli carries a large sack full of goodies, which he offers after the ceremonial “beating” of the bad child. 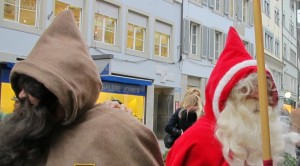 Santa has an evil twin!

While our own brush with Schmutzli and his twig-broom was uneventful, the tradition does have its nasty side. It is reported that a boy in Lucerne was chased and beaten by a band of teenage self-appointed Schmutzli. Yikes.

In some traditions, Schmutzli abducts children, which explains why this tradition fails to gain traction in North America. The season would be thick with lawsuits. That would certainly make a Merry Christmas for lawyers.

You can learn more about Schmutzli by clicking here.

Tidbit: I once interviewed a priest named Father Christmas. I got his name through the New York Dioceses who assured me there were several real Father Christmases in Canada and the U.S. He was very jolly.