Pack-attack: A subset of a traveller’s obsessive-compulsive disorder that leads to repetitive packing-planning sessions.

The second pack-attack of the season struck this week, 73 days out from our trip, which means I got to this task just in the nick of time.

I don’t want to say that I am a packing expert, although I  moved through two hemispheres, five countries, three continents and three provinces. I lose count after that. I’ve packed with an 80-lb. dog in tow, assorted numbers of offspring, and in the range from transporting full households including the kitchen garbage (packed by the moving company without my noticing – they were paid by the pound), to all the way down to what Dave and I could drag while running to catch a train (two suitcases and two carry-ons). 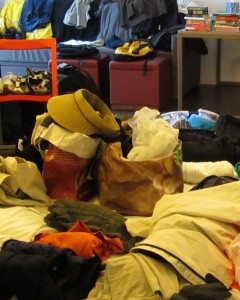 A fraction of our collected goods.

After excavating all our Swiss-worldly goods from our closet, I discovered our possessions have multiplied, possibly while we slept, more likely while I shopped.  I have also made the miserable discovery that our 33 books weighing 15.2 pounds will cost $500 to ship back to Canada, so there will be some serious editing going on over the coming weeks that will enrich our hotel’s library, but cause us some mourning. We love our books, but when it is cheaper to replace them than to post them, well, the typeset is on the wall.

When all was accounted for, it was decided that we need to purchase another suitcase. As if on cue, during Dave’s daily lunch walk, he happened upon a posh black suitcase among a pile of items left at the curb for pick-up. He assures me he did not dumpster-dive. And so he picked it up. It was in fairly good condition and would definitely have weathered one more oceanic crossing, however, this morning it is back at the curb.

Luggage of undetermined origins carries unlimited hazards. My first fear was lice, fleas or other minor lifeforms, but then the larger problem presented itself: What if the thing had ever been used to transport any type of narcotic? A drug dog could easily pick up trace amounts and then where would we be, but in some jail, paying a German-speaking lawyer a huge bulk of money, and all of this through the summer, which, frankly, is the worst time to be incarcerated. Not that I know anything personally about this, but why take the chance?