Someone watching the woman closely could see that she favored her left leg as she sauntered along the canal and into the town square. She drew a plumb-line through the crush of office workers hurrying home, and as she passed the cafe at the far end, she lifted her head at the cigarette smoke drifting up from the tables.

The square fell away behind her so that she was alone again. To her left stood wrought-iron fences guarding deep canal walls that plunged down to rumbling waters. To her right were more cement walls, low and topped with ornate iron stakes that rose protectively around the small coiffed gardens of the town’s grand stone apartments. Heavy fists of lilac leaned over the garden walls and drenched the air in perfume, pushing back the tobacco odour.

Ahead, two men came into view, ambling in the same direction as her; their heads slightly turned in her direction. One man paused to examine a shoebox left by the curb. Almost imperceptibly, the woman hesitated, then stepped off the sidewalk and onto the street, picking up her pace as she drew a large crescent-shaped berth around the men. Her eyes followed the tall spiked gates of the small gardens and down the empty road ahead.

The shoebox man stayed on the sidewalk, but his companion, young and lean, skipped onto the road until he was beside the woman. He spoke a few words in German, and when she only glanced at him, he tested French, moving in closer all the while, right to the point where another inch in and she would have had to stop to keep from walking into him, but he held back just that one inch. Without altering her stride, the woman looked the man full in the face for the first time. She said something.

They reached a road crossing and she stopped. The man continued to prattle at her as she looked down the canal, then past the man where a block away people herded through a retail district. Where the man and woman stood, however, there was only the scent of the lilacs and the sound of the canal. The shoebox man could no longer be seen.

She turned left, almost bumping into the man who stepped back just in time to avoid her, but then he continued on at her side, his face rearranged to convey bewilderment. He hunched his shoulders forward and turned at the waist, forming an umbrella over her. He smiled as he talked, to reveal large white teeth against plum-coloured gums. She moved away from him, stepping off the curb and crossing the street without checking for cars. As though their ankles were cuffed, he held his position beside her. To an onlooker, they walked so close and he talked so intently, they looked like friends.

At the store doors, she turned as though to go in but paused as he begged intently for her phone number. When that did not succeed, he begged for her to take his number. She scraped a foot backward, the store door’s motion sensor blinked, the glass doors parted, and voices from inside wafted around her. She should go in inside. Why doesn’t she go inside, but the man has her fixed in his stare, his dark skin smooth and glinting in copper where it catches the late-afternoon light.

He reaches his hand out and for a moment his intention is unclear, but as if by reflex, she grabs his hand, shakes it and then disappears into the store.

This is more true story than fiction, my account of a quiet, polite and terrifying encounter on the quiet seemingly safe streets of a small Swiss town.

Swiss fitting room - this convenient viewing deck faces onto a bank of mirrors, adding to the viewing pleasure (or horror) of people standing outside.

Just when I think Switzerland has nothing left to surprise me with, someone tries to break into my fitting room.

The store clerk did rap on the change room door first, then quickly rattled the door lever a la Jurassic-Park-velociraptor style, then shoved her hand through the makeshift drape of t-shirts I had over the rectangular hole in the door that the store architect designed to make women nervous. This is in the same tradition that pre-2010 McDonalds architects designed uncomfortable seating to make people hurry out of the restaurant. Somewhere, there is a Cruel School of Architecture, I am sure of it.

The t-shirts hanging from the door still belonged to the store, although I was considering adopting them, but first they were serving as a makeshift curtain because I have a thing about disrobing in front of an audience.

The clerk prattled in Italian while peering inside the coffin-sized fitting room, then tried German.  I opened the door to see she was one of those model-lish retail clerks who could walk down the aisles in her underwear. It would not bother her a bit for with her cinched waist, it would be a catwalk audition, and so she might not understand that women who long ago lost “definition” in their armpits are a little more shy about fitting-room break-ins. She tested out a few other languages on me before explaining in English that

And there you have it. One more reason why Canada looks better every week. 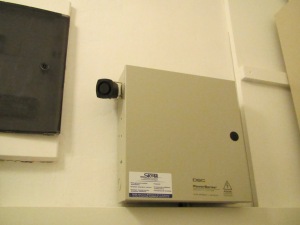 Bratislava bathroom: What the heck is that?

Watching customers undress is the sort of the thing that makes headlines in North America where despite the public’s horror at such a thing, fitting room surveillance is not necessarily illegal. A recreation centre in Calgary has surveillance cameras in their mens and boys change rooms, a fact that they unblushingly defended when a patron went to the media about it.

Retail theft is rampant, so store owners say they are just protecting their business, but it is still discomfiting to think of the minimum-wage  perv leering just outside the fitting room possibly with the iPhone camera at the ready to entertain his or her friends with later.

I put the tops back on the rack and left. Good-bye H & M clothing store. I am sorry to leave behind your lovely fashions and sweet sales, but there are some things I’d just as soon not share with you.

Note: Yes, I have complained about European changeroom culture before.

Second Note: I am positive I saw a video camera in a Bratislava restaurant’s bathroom. Ugh.

Okay, maybe this isn't a camera, but it sure looks like it could be one. Commencing bladder-freeze sequence. 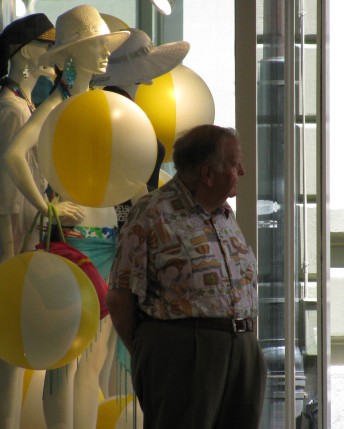 This Frenchman, coming to a fitting room near you.

I heard the low rumble of the Frenchman’s voice seconds after I peeled off my shirt.

What the heck? I was in a woman’s fitting room. What was a man doing on the other side of the curtain?

The change room was the same size as an airplane washroom, putting me in very close proximity to this stranger, while also reaffirming that males still dominate the world of retail architecture.

I snapped my shirt back on and left, getting a friendly smile from the Frenchman on my way out.

In North America, a few women drag their guys into fitting rooms. What is wrong with these women? Can they not make a simple clothing purchase without a man in tow?

Maybe their guys are accessories and the women want to see if they color-coordinate properly before making a commitment to either the outfit or the man? I don’t know, but I do know the practice is more popular here in Switzerland.

I’m still learning the local standards of fitting room etiquette, which so far has appeared in a sideshow-like manner, with the women being the show and the guys cheering from the side.

Yesterday, a 60-ish woman in her underwear flitted in and out of her fitting room into the adjacent hallway, chatting with her husband. She had not yet tried on any new clothes. Puzzling.

The hallway ended before her fitting room and angled onto a window over a street, giving everyone in the store and on the sidewalk a fine view, so to speak, but no crowds massed.  As I said, she was over 60.

Some extol the relaxed attitude other cultures have toward women in various stages of undress, as though this is evidence that these cultures do not over-sexualize the female form.

Those people should have been in a clothing store one block over two weeks ago when a new shipment of swimwear came in. Wide-eyed men with tongues hanging out exchanged approving glances as women trekked into the fitting rooms with bikinis tucked under their arms. These particular change rooms have doors, but the doors happen to have windows that are set at such an angle that presents a wealth of ogling opportunity for any guy standing over five-feet six-inches tall. 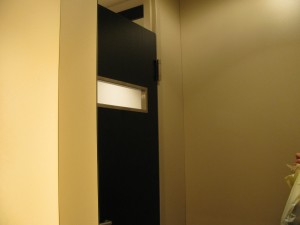 Swiss fitting room - this convenient viewing deck faces onto a bank of mirrors, adding to the viewing pleasure (or horror) of people standing outside.

I settled in to watch the guys watching the girls. It was fascinating, like watching sharks circle. A few men were allowed into this inner sanctum with their girlfriends, grinning all the way.

Then, as another slender attractive young woman walked into the fitting room area with her man at heel, another man slipped into their jet-stream. Seconds later, there was a commotion and the second male scooted out of the area, red-faced, wide-eyed and very happy. The other oglers restrained themselves from high-fiving the offending interloper.

In other more innocent revelations in the next shop over, a four-year-old girl made her way down a bank of fitting rooms, ripping aside curtains as she went, announcing, “Hello, I’m Lily!” exposing a half-dozen clients, all while her mother cooed over her daughter’s adorability.  No one seemed terribly upset.

Postscript: Since writing the above, I visited a few women’s clothing stores in France where I discovered the number of men in the fitting rooms was equal to the number of women. One young woman left the curtain pulled aside so her young man, seated across the hall, could offer his opinions and record her dressing and disrobing on his iPhone. Their matter-of-factness, along with the lack of attention this drew from the other shoppers and their male companions suggests this is business-as-usual.

Postscript the second: This post is being re-published. It is one of my most often-hit posts. I would like to think it is because my writing is clever, but more likely it is because it includes women in various stages of undress.