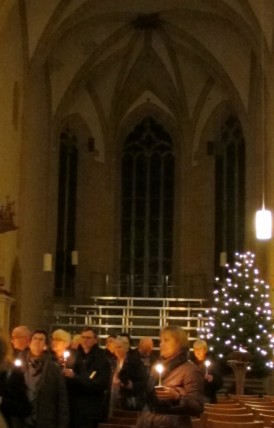 Christmas Eve, we walked up narrow cobblestone alleys to a church dating to the early Middle Ages, our minds anchored to the remembrance of all the generations that made this same trip on this same night through centuries past.

The church is set in the uneven footings of the Jura Mountains, an impressive Gothic building with high ornamented vaults, a massive pipe organ, polished stone floors and faded murals high on its clerestory walls.

It tests the nerves to sit through a service in a language we have yet to grasp, with customs to which we are clueless. Would the congregation do cartwheels? Sing a Las Vegas show-tune? Expect us to stand up and explain ourselves? Test our mettle by demanding we sing Handel’s Hallejulah chorus? Make a public confession of some sort?

The people were quiet – in a building fashioned from stone and stained glass, one expects to hear echo, but it was hard to pick up even a scratch. The service started precisely at 11 p.m. – we are, after all, in Switzerland, the land that guards time. The only decoration was an evergreen tree, adorned only with electric candles, a small wreathe on a flat-cut stone altar and a single burning candle.

A white-haired man in a black suit stepped slowly from the front of the church, not in an air of pomp or down the centre aisle, but in a subdued manner, off to the side, unfurling a beckoning solo from a woodwind instrument. The pipe organ chimed in and this went on until a small man in a black clerical robe with a white bow took the podium. 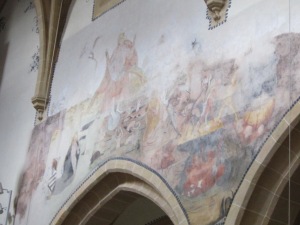 Mural on the clerestory walls at Biel/Bienne's Alstadt Reformed Church

He started reading, and although it was in German we recognized it as the Gospel narrative. He read of Mary’s visitation from the angel, Bethlehem with its paucity of hotels, Jesus’s birth in the grit of a Middle-Eastern stall. The reader paused  now and again, at which the pipe organ filled the church with sounds very much like a steady wind moving through a forest.

And so the service went, woven between a single human voice,  answered by the pipe organ’s choral timbres.

In the silent moments, there was not a sound to be heard, making us wonder about the difference between North American and Swiss Christians. North American churches are alive with noise, shuffle, chatter, even the more stoic ones. This is the first time I’ve sat in a church where there was literally not a sound, a cough, a swish of fabric or the scrape of shoe against the floor. It was as silent as though we were not there.

We sang four songs from the hymn book, beginning with A Mighty Fortress is Our God. As midnight approached, the minister came into the congregation with a candle with which he lit the candles that we had been given at the door. There was no music or reading, just the sound of people tilting their candles one to the other, so that the drops of light slowly spread back into the dark.

When all were lit, the churches lights were turned off altogether and we sang Silent Night.

The pipe organ sang one more piece and then without benediction or comment, the congregation rose and drifted outside, some still carrying their candles into the tranquil night, painting amber pools against the grey cobblestone.

We may be entering an electronic cone-of-silence over the next few days as we travel east by train to check out Viennese pastries and Bratislava’s …. well, whatever it is that makes Bratislava what it is. Auf wiedersehen.

Vienna: Because we haven't seen enough cathedrals, castles and cobblestone ....