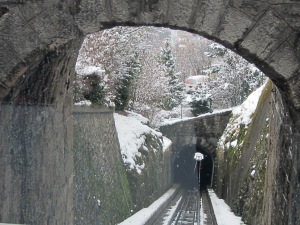 Looking down from the ride up in the funicular at Biel.

Inside of the span of 24 hours, we weathered a windstorm that pushed over giant trees, rain that fed the canal waters to the point where we mused about what would happen if the water spilled its banks, and then snowfall.

We almost felt as though we were back on the Canadian prairies.

All this lousy weather meant that we were honour-bound to head outside (really, we were – click here to see why).  We hit the Jura Mountains for a hike, powered by the greatest food combination known to the modern Euro-world: Knoblauchbrot. It is a half-loaf of French bread (or, should we say Swiss bread?) saturated with butter, garlic and herbs. We’re not sure of the recipe, but my guess is a half-pound of butter goes into every serving.

Then we took a funicular ride up the mountains north of our town. Yes, I said we were going hiking, but it’s steep up them thar hills, so we ride up and hike down. It was at the steeply pitched village of Evilard where we discovered a chocolate maker who just may have bumped Germany off its pedestal as best-chocolatier.

We found the chocolates at Lanz Baclerei Konditorei  (a pastry and bakery establishment) in an unassuming corner of what appeared to be a white plaster apartment building, its chief decorative element being a rolled-up orange and brown awning.  The shop gal assured us the chocolates in their display case were all made in the shop. Having discovered a true family/boutique chocolaterie, I was not about to miss out on an impromptu taste-test.

Note to the wise: When the Swiss label their liquor chocolates, they mean it. It’s not just liquor-flavoured, it’s a quarter-shot of booze in every bite. Adjust consumption levels accordingly.

We bypassed the serious liquor chocolates and had truffles instead. Their ranking: Fabulous. Maybe even better than the German chocolates but in the interest of judicial impartiality and rigour, I would have to go back to Germany for further testing. It would only be right.