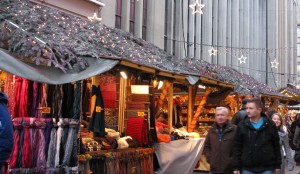 Zürich Christmas Market - like any other market, but with boughs and lights.

Do one million Swiss Francs of crystals a Christmas tree make?

That is the question posed by the Swarovski tree, a crystal-encrusted tree in Zürich (with similar trees posted across the world).*

Swarovski-jewelled Christmas tree. Who is the star in this display?

At 95 buckeroos per ornament, that is some tree. Bloggers and Youtube-posters report the twinkle costs one million Swiss Francs (the amount cannot be found on the Swarovski website).

It begs the questions about whether this is Christmas. My knee-jerk reaction is that it is not.

It is far removed from the first Christmas when a teenage gal inhaled the aroma of manure as she gave birth to her illegitimate son, after suffering the sting of rejection from the town’s innkeepers (who probably would have found a room for her had she been a centurion’s wife). If you’ve ever been turfed out of an emergency room while in massive pain, you might have an idea of how rough a night it was for Mary and Joseph.

But that illegitimate baby’s message, as anyone who has read the Gospels will know, is that neither poverty, stink, politics, or oppression matter so much. While his followers hoped for an overthrow of Roman rule, Jesus discarded the topic, pointing out that his kingdom was not mired in such earthly trivialities.

His point, if I read it right, is that these outward things need not affect one’s inner life or value. It is the heart that matters, not the hearth. As far we know, he never waged a petition campaign to force innkeepers to take in labouring mothers, although through the centuries that came after, his followers built hospitals in the spirit of his message. Doubt me? From where do you think the word “Saint” in front of so many hospitals came from?

But this is not to diss Swarovski who to their credit subscribe to a historically correct moniker for their display. They call the tree what it is: A Christmas tree. Not a holiday homage, festive festooning or anything silly like that.

As a writer steeped in the conviction that everything means something, I could say the shine of the crystals points to heaven, a place not yet found on any map, but which another writer called “the enduring myth.” How can you explain it when so many people sense its presence?

The crystals are one thing, but it is the tree that catches my eye, a creation harvested not from a factory, but a forest. It points to another creator, who is the subject of great debate, especially at this time of year. From whatever side you argue this, the tree is brilliant workmanship.

So here’s to Swarovski for the shiny bits, and here’s to God for the tree, Christmas and all that it means.

*Click on this link to see tree locations across the globe.

2 thoughts on “Christmas markets here and there”