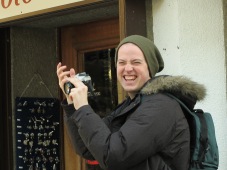 Steve: We're on a mountainside. What could go wrong?

Oh not much, except maybe falling off a cliff.

We are reaching the halfway point of our stay here in Switzerland. I started this blog to give some insight on the realities of overseas life, which from the outside has a glam shine to it, but on the inside, is more like listening the grinding sound of our lives coming to a halt. It is akin to being stuck in traffic, except the scenery is always changing.

I admit the scenery is pretty spectacular.

Being away means that we lose pockets of widely known information, such as who was premier in British Columbia. I was totally unaware of David Miller’s term in that office, owing to a protracted stay in Spain during his short tenure. At this moment, I cannot name most of Canada’s provincial premiers, even those that I have lived in.

On a more personal level, we lose touch with the dramas and comedies running in the lives of our friends and families, although this is not as parched an informational season as it was on past work terms, thanks to Facebook, email and Skype.

The truth is that living overseas is not the same as touring overseas. It is laced with unsympathetic administrators, and the occasional xenophobe who holds a grudge against all foreign workers and their families. 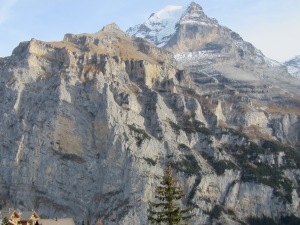 The bureaucratic presence, however, has subsided for the time-being, and despite Switzerland having recently voted in what is regarded as its most insular xenophobic party, the number of actual xenophobes on the street are few. And so without an undercurrent of worry about being kicked out of the country, this blog has turned into something of a travel-blog, replacing the old travelogues – remember those? If you’re do, you are very old.

The problem is that travel blogs are supposed to include adventure and, of course, lots of travel. I am afraid of travel, so any element of adventure in these notes is totally unanticipated by me.

When I worked at a city paper, the editors realized my cowardice and my sheltered risk-adverse lifestyle, and so took it upon themselves to send me wherever the opportunity for crushing injury was most likely to occur. They knew it would generate a lively article typed out by my terrified fingertips, should I still have them on my return to the office.

This week, we did have the potential for a small brush with adventure (aside from the blast and smoke at the train station) with the arrival of Steve, one of our son’s old friends who is working in Switzerland over the winter. Steve is famous for having adventures of all sorts. He’s the type that attracts them, so if ever we were going to plunge off a cliff edge, this would be the day.

The steep cliffs in Lauterbrunnen.

Note of personal interest: Steve actually almost led to our son plunging off a cliff edge on Vancouver Island, when he convinced our boy the climb was not really a pure vertical. Also, Dave will not go golfing with Steve ever again, although Steve says, “You have to get over that.” I will describe what “that” is another time, but it happened almost a decade ago.

As we exited the train at Lauterbrunnen, I commented on how everything was going so well, despite Steve’s presence. He said, “Who would think that in ten minutes, we’ll be clinging to a cliff edge.”

He was wrong about that, but it was not entirely outside of the realm of possibility.

Later that day, when we heard that bang in the Bern train station and saw a column of black smoke rising up to the roof, I was not really surprised. I always expect the worst, so it made sense that we would arrive at the precise moment some terrorist organization should decide to detonate a crowded rail station.

Imagine my surprise that it turned out to be nothing, which leads us to the upside of being a pessimist: Happiness and wonder. Joy is what comes of expecting everything to go wrong, and finding that not everything does.

Optimists miss out on so much.

In the meantime, we have seven or eight more months here. Let’s see if we can get into any trouble in that time. And for those looking for more adrenalin in their lives, check out Jeb Corliss sailing off a Swiss cliff by clicking here.