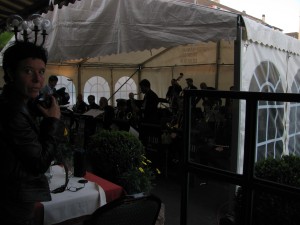 A local jazz band performs at our hotel's fundraiser for a horse camp for children with disabilities.

Our hotel threw a fundraiser to  send kids to camp this week. I am all in favor of sending kids away, but am fundraiser-event averse – that is to say, I would rather throw money at a cause than throw away a perfectly nice quiet evening at home in support of it.

It’s partly due to my feeling that the amount of money spent on throwing a party or auction is wasteful; that all that money should go directly to the needy organization.
But I am wrong about that, and I know it, because as a sometimes-reluctant fundraiser, I have seen the payback on gimmicky auctions, balloon-lotteries, bake-sales and so forth.
This does nothing to alter my affection for avoiding fundraisers so I can devote my evenings to other worthwhile endeavors, such as watching the entire 30Rock season on DVD without interruption. Is there something wrong with that?
Nevertheless, when the hotel staff invited us to their fundraiser, we had to go.  While our relationship is essentially a business one – they provide us with a hotel room and we provide them with money – these are still the people with whom we have the most contact. They are in the most practical sense, our neighbours.

I was going to order BBQ pork steak, but the staff talked me into a Swiss favorite - Tarte flambe', which is not a tart at all, but an oval tortllla-like shell topped with bacon, onions and sour cream. It was pretty good.

When I leave my room, Theresa and Isabelle, our floor’s cleaning staff, coach me in French, much to my agony and their despair.

When I hit the street I pass a favorite smoking-break alcove and the staff (who shall remain nameless on this point because what is spoken of in the alcove stays in the alcove) always invite me to stop for a chat, the latest topic of which was marriage: Whether one staffer should do it and why another’s failed.

The overall professional distance adopted between hotel staff and clients evaporates when you check in for over a year. It is still there, but when the manager is not around, the staff relax their language, displaying an impressive command of English expletives.
And so we gave up an evening for the fundraiser, which turned out to be more fun than expected, possibly because it was held in the hotel, and therefore, we did not really  have to leave home to go to it.