The modern garden gnome springs from German ceramic artists (circa 1900), but a lesser known fact is that  Swiss doctor Philippus von Hohenheim (1492-1541) revived ancient mythologies around goblins and dwarves in the form of gnomes,  that he asserted moved through earth in the way that humans move through air, and were possibly always at war with migrating cranes (the birds, not the machinery).

This illustrates how messed up the medical establishment was in the 16th century. 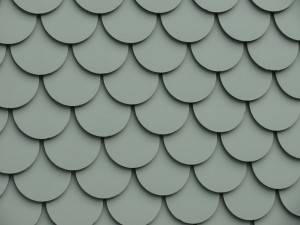 Please write to me if you see any paint splotches in this wall of fishscale shingles.

We ran into a few gnomes in Appenzell. Not as many as that which  populated Canadian gardens in the 1960s, but a few. We did not like them then. We don’t like them so much now, but they are okay if they stay in Switzerland where they match the decor.

But we liked Appenzell, which differed markedly from Switzerland’s big-city architecture that is dominated by stone (we like Switzerland’s big cities, too).  Appenzell buildings were almost all wood-clad, many with round shingles that I scrutinized for paint dribbles. I couldn’t locate so much as a thumbnail-splotch. Coincidentally, Switzerland has the world’s 23rd highest suicide rate.  These two factors may be related.

Appenzell is called cowbell country, and rightly so, because there are lots of beat-up cowbells in baskets outside gift shops, but not so many on the cows, who were mostly naked.  Had these bells ever seen the underside of a cow’s jaw? My skepticism kicked in and I sniffed one of the bell’s weathered leather collars and did not catch the tiniest whiff of barnyard life. Dave made sure to stand far away while I smelled the collars, as though there was something unusual about this.

We also saw sheep with bells, but could not find “sheepbells” at the gift shops. 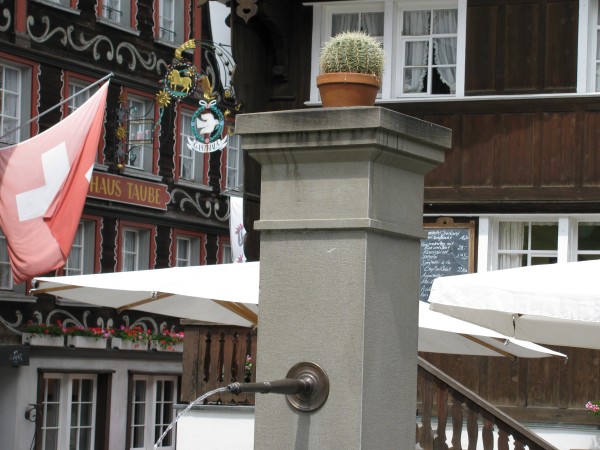 Most Swiss fountains are topped with statues of local heroes or historical figures. Appenzell has a cactus. We don't know what to make of this. 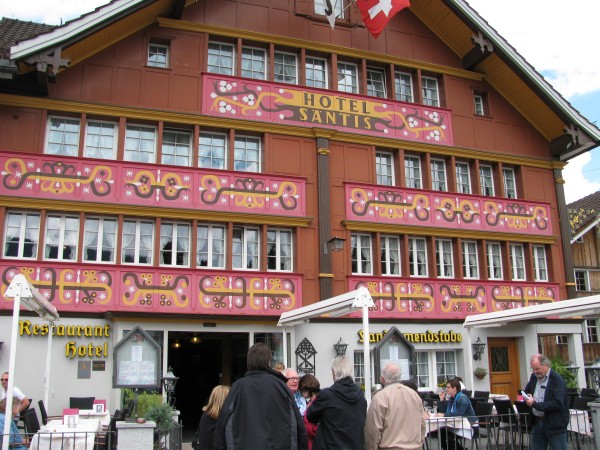 No one can compete with Switzerland's patriotism and flag-waving - not even the U.S.

Even beaten-up buildings retain their charm.

After a three-hour train ride, we did not visit the cow museum, but we did go into the lobby and take a photo of this cowesque art.

Humble buildings line the village streets, but they are no less charming than those found in bigger cities.

Entrance to hardware store ... looked like the way to someone's garage. We don't know how this affects their business.

Aha! The paint job is not so perfect at the hardware store.

Another clock tower. We are still in Switzerland, the land where tardiness is without excuse.